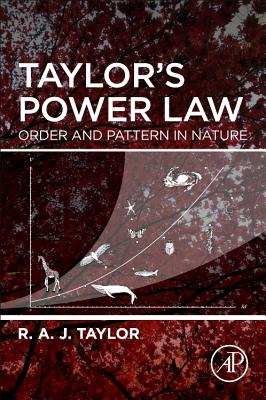 Taylor's Power Law: Order and Pattern in Nature is a broad synthesis of this ubiquitous property of natural and man-made phenomena. This stimulating and approachable work surveys the biological and non-biological empirical data, describes the statistical uses of Taylor's power law (TPL) and its relationship to statistical distributions, exposes the mathematical connections to other power laws, covers the competing explanatory models; and develops an argument for TPL's genesis.

Taylor's power law relates the variability of a process or population to its average value. It was first described in relation to insect populations and then more broadly to other animal and plant populations. Subsequently it has been recognized in microbiology, genetics, economics, astronomy, physics, and computer science, and it is thought to be one of the few general laws in ecology where it is routinely used to describe the spatial and temporal distributions of populations.

Biologists who know the law as Taylor's power law and physical scientists who know it as fluctuation scaling will be interested in the bigger picture on this fascinating subject. As the relationship between variance and mean is found in so wide a range of disciplines, it seems possible it is a deep property of number, not just a phenomenon in ecology as was thought originally. Although theories abound that purport to explain or predict TPL, none is entirely satisfactory either because it fails to be very predictive, or it does not account for all the available empirical data. To uncover such a property requires a synthesis across disciplines, an acute need that is approached by this exciting work.