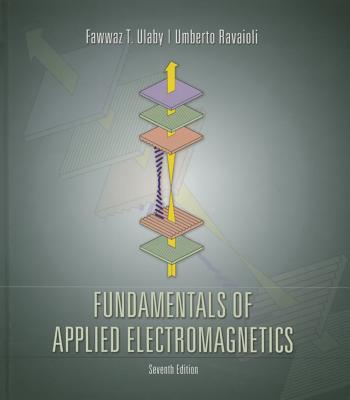 Fundamentals of Applied Electromagnetics is intended for use in one- or two-semester courses in electromagnetics. It also serves as a reference for engineers.

Widely acclaimed both in the U.S. and abroad, this authoritative text bridges the gap between circuits and new electromagnetics material. Ulaby begins coverage with transmission lines, leading students from familiar concepts into more advanced topics and applications. A user-friendly approach, full-color figures and images, and a set of interactive simulations will help readers understand the concepts presented.

Fawwaz Ulaby
Since joining the University of Michigan faculty in 1984, Professor Ulaby has directed numerous interdisciplinary projects aimed at the development of high-resolution satellite radar sensors for mapping Earth's terrestrial environment. He also served as the founding director of the NASA-funded Center for Space Terahertz Technology, whose research was aimed at the development of microelectronic devices and circuits that operate at wavelengths between the infrared and the microwave regions of the electromagnetic spectrum. He then served a seven-year term as the University of Michigan's vice president for research from 1999-2005. Over his academic career, he has published 10 books and supervised more than 100 graduate students.

Professor Ulaby is a member of the U.S. National Academy of Engineering, Fellow of the American Association for the Advancement of Science (AAAS) and the Institute of Electrical and Electronic Engineers (IEEE), and serves on several international scientific boards and commissions. In recognition for his outstanding teaching and distinguished scholarship, he has been the recipient of numerous honors and awards from universities, government agencies, and scientific organizations. Among them are the NASA Achievement Award (1990), the IEEE Millennium Medal (2000), the 2002 William Pecora Award, a joint recognition by NASA and the Department of the Interior, and the Distinguished FEA Alumni Award from the American University of Beirut (2006). In 2006, he was selected by the students in the Department of Electrical Engineering and Computer Science as "Professor of the Year," and shortly thereafter, he was awarded the Thomas Edison Medal, the oldest medal in the field of electrical and computer engineering in the United States.

Umberto Ravaioli
Professor Ravaioli attended the University of Bologna, Italy, where he obtained degrees in Electronics Engineering and Physics. He conducted his dissertation work on fiber optics and microwaves at the laboratories of the Marconi Foundation in Villa Griffone, the summer estate where Guglielmo Marconi performed his first radio experiments. After developing interests in high speed semiconductor devices and large scale computation, he pursued a Ph.D. in Electrical Engineering at Arizona State University, where he developed Monte Carlo particle simulations for the high electron mobility transistor.

He joined the Department of Electrical and Computer Engineering of the University of Illinois at Urbana-Champaign in 1986. He was a co-founder of the National Center for Computational Electronics, which promoted for over a decade the development of large scale device simulation by leveraging resources at national supercomputing centers. His research group has developed Monte Carlo and quantum simulators for a wide range of semiconductor device applications, expanding recent activities to charge transport in biological systems, coupled electro-thermal simulation, and nanoelectronics. He is now the leader of the Computational Multiscale Nanosystems group at the Beckman Institute of the University of Illinois and is also serving as Senior Assistant Dean for Undergraduate Programs in the College of Engineering.