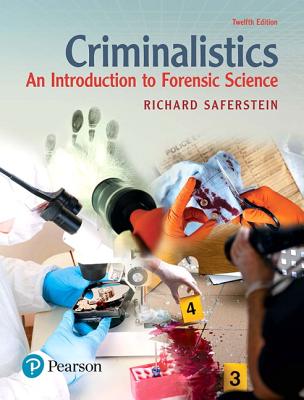 For introductory courses in Forensic Science and Crime Scene Investigation

A clear introduction to the technology of the modern crime laboratory for non-scientists
Criminalistics: An Introduction to Forensic Science, Twelfth Edition, uses clear writing, case stories, and modern technology to capture the pulse and fervor of forensic science investigations. Written for readers with no scientific background, only the most relevant scientific and technological concepts are presented. The nature of physical evidence is defined, and the limitations that technology and current knowledge impose on its individualization and characterization are examined. A major portion of the text centers on discussions of the common items of physical evidence encountered at crime scenes. Particular attention is paid to the meaning and role of probability in interpreting the evidential significance of scientifically evaluated evidence. Updated throughout, the Twelfth Edition includes a new chapter on the exciting field of forensic biometrics. With its easy-to-understand writing and straightforward presentation, this best-selling text is clear and comprehensible to a wide variety of students.

Richard Saferstein, Ph.D., retired after serving 21 years as the chief forensic scientist of the New Jersey State Police Laboratory, one of the largest crime laboratories in the United States. He currently acts as a consultant for attorneys and the media in the area of forensic science. During the O. J. Simpson criminal trial, Dr. Saferstein provided extensive commentary on forensic aspects of the case for the Rivera Live show, the E! television network, ABC radio, and various radio talk shows. Dr. Saferstein holds degrees from the City College of New York and earned his doctorate degree in chemistry in 1970 from the City University of New York. From 1972 to 1991, he taught an introductory forensic science course in the criminal justice programs at the College of New Jersey and Ocean County College. These teaching experiences played an influential role in Dr. Saferstein's authorship in 1977 of the widely used introductory textbook Criminalistics: An Introduction to Forensic Science, currently in this twelfth edition. Saferstein's basic philosophy in writing Criminalistics is to make forensic science understandable and meaningful to the nonscience reader, while giving the reader an appreciation for the scientific principles that underlie the subject.

Dr. Saferstein has authored or co-authored more than 45 technical papers and chapters covering a variety of forensic topics. Dr. Saferstein has co-authored Lab Manual for Criminalistics (Pearson, 2015) to be used in conjunction with this text. He is also the author of Forensic Science: An Introduction (Pearson, 2008 and 2011) and Forensic Science: From the Crime Scene to the Crime Lab (2009 and 2015). He has also edited the widely used professional reference books Forensic Science Handbook, Volumes I, II, and III, 2nd edition (published in 2002, 2005, and 2010, respectively, by Pearson).