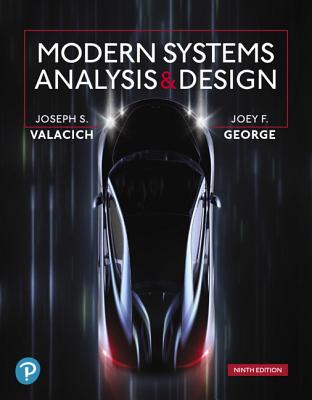 For courses in structured systems analysis and design.

Developing advanced system analysts
Prioritizing the practical over the technical, Modern Systems Analysis and Design presents the concepts, skills, methodologies, techniques, tools, and perspectives essential for systems analysts to develop information systems. The authors assume students have taken an introductory course on computer systems and have experience designing programs in at least one programming language. By drawing on the systems development life cycle, the authors provide a conceptual and systematic framework while progressing through topics logically. The 9th edition has been completely revised to adapt to the changing environment for systems development, with a renewed focus on agile methodologies.

Joseph S. Valacich is an Eller professor of management information systems in the Eller College of Management at the University of Arizona. He has had visiting faculty appointments at Buskerud College (Norway), City University of Hong Kong, Norwegian University of Life Sciences, Riga Technical University (Latvia), and Helsinki School of Economics and Business. He received a PhD from the University of Arizona (MIS), and an MBA and a BS degree in computer science from the University of Montana. His teaching interests include systems analysis and design, collaborative computing, project management, and management of information systems. Dr. Valacich co-chaired the national task forces to design IS 2010: The Model Curriculum and Guidelines for Undergraduate Degree Programs in Information Systems. He also served on the Executive Committee, funded by the National Science Foundation, to define the IS Program Accreditation Standards and on the Board of Directors for CSAB (formally, the Computing Sciences Accreditation Board), representing the Association for Information Systems (AIS). He was the general conference co-chair for the 2003 International Conference on Information Systems (ICIS), and the co-chair for the Americas' Conference on Information Systems (AMCIS) in 2012. Prior to his academic career, Dr. Valacich worked in the information systems field as a programmer, a systems analyst, and a technical product manager. He has conducted numerous corporate training and executive development programs for organizations, including AT&T, Boeing, Dow Chemical, EDS, Exxon, FedEx, General Motors, Microsoft, and Xerox. Dr. Valacich is the co-editor-in-chief of AIS Transactions on Human-Computer Interaction, a senior editor at MIS Quarterly, and was formerly an associate editor for Information Systems Research. He has published more than 200 scholarly articles in numerous prestigious journals and conferences. His scholarly work has had a tremendous impact not only on the field of information systems, but also on a number of other disciplines, including computer science, cognitive and social psychology, marketing, and management. In February 2014, Google Scholar listed his citation counts at over 13,800, with an H-index of 54. He is also a coauthor of the leading Modern Systems Analysis and Design, 7th Edition, and Information Systems Today, 7th Edition.

Joey F. George is a professor of information systems and the John D. DeVries Endowed Chair in Business at the Iowa State University College of Business. Dr. George earned his bachelor's degree at Stanford University in 1979 and his PhD in management at the University of California at Irvine in 1986. He was previously the Edward G. Schlieder Chair of Information Systems in the E. J. Ourso College of Business Administration at Louisiana State University. He also served at Florida State University as chair of the Department of Information and Management Sciences from 1995 to 1998. Dr. George has published dozens of articles in such journals as Information Systems Research, Communications of the ACM, MIS Quarterly, Journal of MIS, and Communication Research. His research interests focus on the use of information systems in the workplace, including computer-based monitoring, computer-mediated deceptive communication, and group support systems. Dr. George is coauthor of the texts Modern Systems Analysis and Design, 7th Edition, published in 2014, and Object-Oriented Systems Analysis and Design, 2nd Edition, published in 2007, both with Pearson. He has served as an associate editor and senior editor for both MIS Quarterly and Information Systems Research. For three years he was editor-in-chief of the Communications of the AIS. Dr. George was the conference co-chair for the 2001 ICIS, held in New Orleans, Louisiana; conference chair for the 2012 ICIS, held in Orlando, Florida; and the doctoral consortium co-chair for the 2003 ICIS, held in Seattle, Washington. He is a fellow of the Association for Information Systems (AIS) and served as president of AIS from 2010 to 2011.