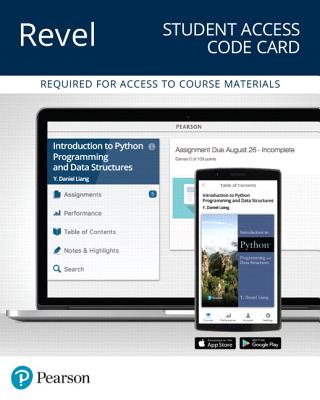 For introductory courses in Python Programming and Data Structures.
A fundamentals first approach to programming helps students create efficient, elegant code Revel(TM) Introduction to Python Programming and Data Structures introduces students to basic programming concepts using a fundamentals-first approach that prepares students to learn object-oriented programming and advanced Python programming. This approach presents programming concepts and techniques that include control statements, loops, functions, and arrays before designing custom classes. Students learn basic logic and programming concepts prior to moving into object-oriented and GUI programming. The content incorporates a wide variety of problems with various levels of difficulty and covers many application areas to engage and motivate students.
Revel is Pearson's newest way of delivering our respected content. Fully digital and highly engaging, Revel replaces the textbook and gives students everything they need for the course. Informed by extensive research on how people read, think, and learn, Revel is an interactive learning environment that enables students to read, practice, and study in one continuous experience - for less than the cost of a traditional textbook.
NOTE: Revel is a fully digital delivery of Pearson content. This ISBN is for the standalone Revel access card. In addition to this access card, you will need a course invite link, provided by your instructor, to register for and use Revel.

Dr. Y. Daniel Liang earned his Ph.D. in Computer Science from the University of Oklahoma in 1991, and an MS and BS in Computer Science from Fudan University in Shanghai, China, in 1986 and 1983. Prior to joining Armstrong, he was an associate professor in computer science at Purdue University in Fort Wayne, where he twice received the Excellence in Research award.
Dr. Liang was trained in theoretical computer science. He was active in graph algorithms from 1990 to 1995 and published more than ten papers in several established journals such as SIAM Journal on Computing, Discrete Applied Mathematics, Acta Informatics, and Information Processing Letters. Since 1996, he has devoted to writing texts and published more than thirty books with Prentice Hall. His popular computer science texts are widely adopted in the world.
Dr. Liang was elected a Java Champion in 2005 by Sun Microsystems and has given lectures on Java internationally.