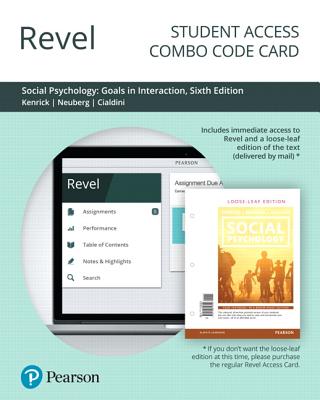 A unique integrated approach to social behavior, REVEL for Social Psychology: Goals in Interaction, Sixth Edition invites readers to consider the interplay of influences both within and outside the person in social situations. Organized around two broad questions - "What purposes does this behavior serve for an individual?" and "Which factors lead an individual to use this behavior to achieve those goals?" - each chapter prompts students to consider personal and situational factors, as well as the interactions among these factors, when analyzing human behavior. REVEL(TM) is Pearson's newest way of delivering our respected content. Fully digital and highly engaging, REVEL offers an immersive learning experience designed for the way today's students read, think, and learn. Enlivening course content with media interactives and assessments, REVEL empowers educators to increase engagement with the course, and to better connect with students. NOTE: This Revel Combo Access pack includes a Revel access code plus a loose-leaf print reference (delivered by mail) to complement your Revel experience. In addition to this access code, you will need a course invite link, provided by your instructor, to register for and use Revel.