Revel for Out of Many: A History of the American People, Volume 2 -- Combo Access Card 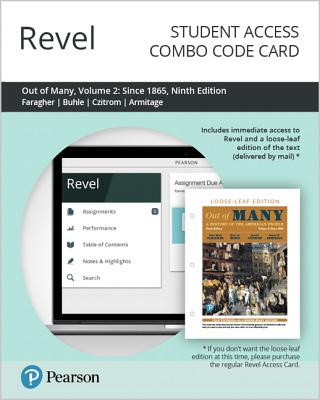 For courses in U.S. History Show students how diverse communities and different regions have shaped America
Revel(TM) Out of Many: A History of the American People focuses on particular communities and regions to weave the stories of the people and the nation into a single compelling narrative that continues to this day. Approaching American history from a truly continental perspective, authors John Faragher, Mari Jo Buhle, Daniel Czitrom, and Susan Armitage present vignettes -- from New England to the South, the Midwest to the far West -- that help students see how diverse communities and different regions have shaped America's past. Updated with the latest data throughout, the 9th Edition emphasizes the impact of social and economic inequality on contemporary American life from 1974 to the present. Revel is Pearson's newest way of delivering our respected content. Fully digital and highly engaging, Revel replaces the textbook and gives students everything they need for the course. Informed by extensive research on how people read, think, and learn, Revel is an interactive learning environment that enables students to read, practice, and study in one continuous experience -- for less than the cost of a traditional textbook.
NOTE: This Revel Combo Access pack includes a Revel access code plus a loose-leaf print reference (delivered by mail) to complement your Revel experience. In addition to this access code, you will need a course invite link, provided by your instructor, to register for and use Revel.

John Mack Faragher is the Howard R. Lamar Professor of History and director of the Howard R. Lamar Center for the Study of Frontiers and Borders at Yale University. Born in Arizona and raised in southern California, he received his B.A. at the University of California, Riverside, and his Ph.D. at Yale University. He is the author of Women and Men on the Overland Trail (1979), Sugar Creek: Life on the Illinois Prairie (1986), Daniel Boone: The Life and Legend of an American Pioneer (1992), The American West: A New Interpretive History (2000), A Great and Noble Scheme: The Tragic Story of the Expulsion of the French Acadians from Their American Homeland (2005), and Eternity Street: Violence and Justice in Frontier Los Angeles (2016). Mari Jo Buhle is William R. Kenan, Jr. University Professor Emerita of American Civilization and History at Brown University, specializing in American women's history. She received her B.A. from the University of Illinois, Urbana-Champaign, and her Ph.D. from the University of Wisconsin, Madison. She is the author of Women and American Socialism, 1870-1920 (1981) and Feminism and Its Discontents: A Century of Struggle with Psychoanalysis (1998). She is also coeditor of the Encyclopedia of the American Left (2nd Edition, 1998). Professor Buhle held a fellowship (1991-1996) from the John D. and Catherine T. MacArthur Foundation. She is currently an Honorary Fellow of the History Department at the University of Wisconsin, Madison. Daniel Czitrom is Professor of History at Mount Holyoke College. Born and raised in New York City, he received his B.A. from the State University of New York at Binghamton and his M.A. and Ph.D. from the University of Wisconsin, Madison. He is the author of New York Exposed: The Gilded Age Police Scandal That Launched the Progressive Era (2016), Media and the American Mind: From Morse to McLuhan (1982), and co-author of Rediscovering Jacob Riis: Exposure Journalism and Photography in Turn of the Century New York (2008). He served as the historical adviser for the BBC America dramatic series Copper (2011-2013), and he has appeared as featured on-camera commentator in numerous documentary film projects, including the PBS productions New York: A Documentary Film; The Rise and Fall of Penn Station; American Photography: A Century of Images; and the forthcoming Joseph Pulitzer: Voice of the People. Susan H. Armitage is Professor of History and Women's Studies, Emerita, at Washington State University, where she was a Claudius O. and Mary R. Johnson Distinguished Professor. She earned her Ph.D. from the London School of Economics and Political Science. Among her many publications on western women's history are three co-edited books, The Women's West (1987), So Much To Be Done: Women on the Mining and Ranching Frontier (1991), and Writing the Range: Race, Class, and Culture in the Women's West (1997). She served as editor of the feminist journal Frontiers from 1996 to 2002. Her most recent publications are Speaking History: Oral Histories of the American Past, 1865-Present (2009) and Shaping the Public Good: Women Making History in the Pacific Northwest (2015).