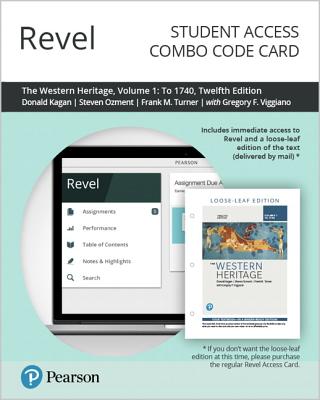 For courses in history of Western civilization An authoritative account of Western civilizations
Revel(TM) The Western Heritage weaves social, cultural, and political history into a strong, clear, narrative account of the central developments in Western history. Authors Donald Kagan, Steven Ozment, and Frank Turner define how the West has interacted with other cultures, and show how the history of Western civilization can shed light into global challenges today. In order to help students achieve a thorough understanding of Western civilization, the 12th Edition has been updated to reflect recent developments -- in the West and beyond.
Revel is Pearson's newest way of delivering our respected content. Fully digital and highly engaging, Revel replaces the textbook and gives students everything they need for the course. Informed by extensive research on how people read, think, and learn, Revel is an interactive learning environment that enables students to read, practice, and study in one continuous experience -- for less than the cost of a traditional textbook.
NOTE: This Revel Combo Access pack includes a Revel access code plus a loose-leaf print reference (delivered by mail) to complement your Revel experience. In addition to this access code, you will need a course invite link, provided by your instructor, to register for and use Revel.