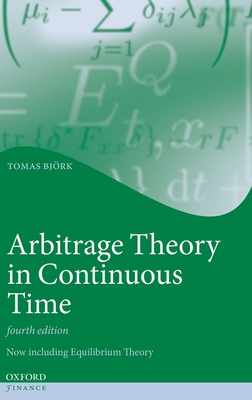 Concentrating on the probabilistic theory of continuous time arbitrage pricing of financial derivatives, including stochastic optimal control theory and optimal stopping theory, Arbitrage Theory in Continuous Time is designed for graduate students in economics and mathematics, and combines the
necessary mathematical background with a solid economic focus. It includes a solved example for every new technique presented, contains numerous exercises, and suggests further reading in each chapter. All concepts and ideas are discussed, not only from a mathematics point of view, but with lots of
intuitive economic arguments.

Providing two full treatments of arbitrage theory-the classical delta hedging approach and the modern martingale approach-this book is written so that these approaches can be studied independently of each other, thus providing the less mathematically-oriented reader with a self-contained
introduction to arbitrage theory and equilibrium theory, while at the same time allowing the more advanced student to see the full theory in action.

This textbook is a natural choice for graduate students and advanced undergraduates studying finance and an invaluable introduction to mathematical finance for mathematicians and professionals in the market.

Tomas Bjork is Professor Emeritus of Mathematical Finance at the Stockholm School of Economics. He has previously worked at the Mathematics Department of the Royal Institute of Technology, also in Stockholm.
Tomas Bjork has been president of the Bachelier Finance Society, co-editor of Mathematical Finance, and has been on the editorial board for Finance and Stochastics and other journals. He has published numerous journal articles on mathematical finance, and in particular is known for his research on
point process driven forward rate models, consistent forward rate curves, general interest rate theory, finite dimensional realisations of infinite dimensional SDEs, good deal bounds, and time inconsistent control theory.