An Introduction to Statistical Mechanics and Thermodynamics (Hardcover) 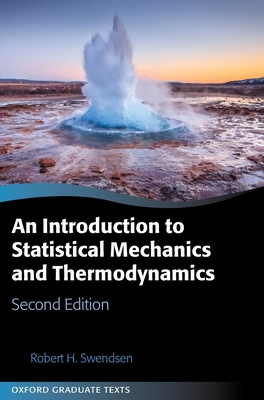 An Introduction to Statistical Mechanics and Thermodynamics returns with a second edition which includes new chapters, further explorations, and updated information into the study of statistical mechanics and thermal dynamics.

The first part of the book derives the entropy of the classical ideal gas, using only classical statistical mechanics and an analysis of multiple systems first suggested by Boltzmann. The properties of the entropy are then expressed as "postulates" of thermodynamics in the second part of the book. From these postulates, the formal structure of thermodynamics is developed.

The third part of the book introduces the canonical and grand canonical ensembles, which are shown to facilitate calculations for many model systems. An explanation of irreversible phenomena that is consistent with time-reversal invariance in a closed system is presented.

The fourth part of the book is devoted to quantum statistical mechanics, including black-body radiation, the harmonic solid, Bose-Einstein and Fermi-Dirac statistics, and an introduction to band theory, including metals, insulators, and semiconductors. The final chapter gives a brief introduction to the theory of phase transitions.

Throughout the book, there is a strong emphasis on computational methods to make abstract concepts more concrete.

Robert Swendsen received his BS from Yale and his PhD from the University of Pennsylvania. He did postdoctoral work at the Universitat zu Koln, Germany, the Kernforschungsanlage in Julich, Germany, and Brookhaven National Laboratory. From 1978 to 1984 he worked at the IBM Zurich Research Center. In 1984, he joined Carnegie Mellon University.

He is a Fellow of both the American Physical Society and the American Association for the Advancement of Science. He was given an IBM
Outstanding Achievement Award in 1981 and shared a Forefronts of Large-Scale Computational Problems Award with S. Kumar, J.M. Rosenberg, and P.A. Kollman in 1991. He was awarded the 2014 Aneesur Rahman Prize for Computational Physics and the 2014 Julius Ashkin Teaching Award in the Mellon College of Science at Carnegie Mellon University.