From Fingers to Digits: An Artificial Aesthetic 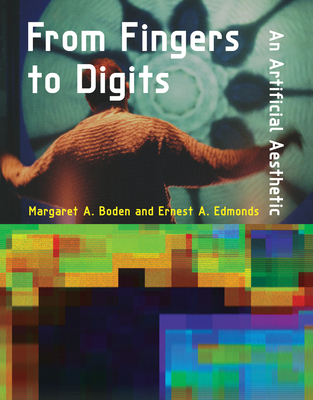 Essays on computer art and its relation to more traditional art, by a pioneering practitioner and a philosopher of artificial intelligence.

In From Fingers to Digits, a practicing artist and a philosopher examine computer art and how it has been both accepted and rejected by the mainstream art world. In a series of essays, Margaret Boden, a philosopher and expert in artificial intelligence, and Ernest Edmonds, a pioneering and internationally recognized computer artist, grapple with key questions about the aesthetics of computer art. Other modern technologies--photography and film--have been accepted by critics as ways of doing art. Does the use of computers compromise computer art's aesthetic credentials in ways that the use of cameras does not? Is writing a computer program equivalent to painting with a brush?

Essays by Boden identify types of computer art, describe the study of creativity in AI, and explore links between computer art and traditional views in philosophical aesthetics. Essays by Edmonds offer a practitioner's perspective, considering, among other things, how the experience of creating computer art compares to that of traditional art making. Finally, the book presents interviews in which contemporary computer artists offer a wide range of comments on the issues raised in Boden's and Edmonds's essays.