Our Moral Fate: Evolution and the Escape from Tribalism 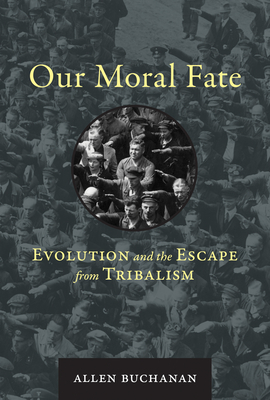 A provocative and probing argument showing how human beings can for the first time in history take charge of their moral fate.

Is tribalism--the political and cultural divisions between Us and Them--an inherent part of our basic moral psychology? Many scientists link tribalism and morality, arguing that the evolved "moral mind" is tribalistic. Any escape from tribalism, according to this thinking, would be partial and fragile, because it goes against the grain of our nature. In this book, Allen Buchanan offers a counterargument: the moral mind is highly flexible, capable of both tribalism and deeply inclusive moralities, depending on the social environment in which the moral mind operates.

We can't be morally tribalistic by nature, Buchanan explains, because quite recently there has been a remarkable shift away from tribalism and toward inclusiveness, as growing numbers of people acknowledge that all human beings have equal moral status, and that at least some nonhumans also have moral standing. These are what Buchanan terms the Two Great Expansions of moral regard. And yet, he argues, moral progress is not inevitable but depends partly on whether we have the good fortune to develop as moral agents in a society that provides the right conditions for realizing our moral potential. But morality need not depend on luck. We can take charge of our moral fate by deliberately shaping our social environment--by engaging in scientifically informed "moral institutional design." For the first time in human history, human beings can determine what sort of morality is predominant in their societies and what kinds of moral agents they are.