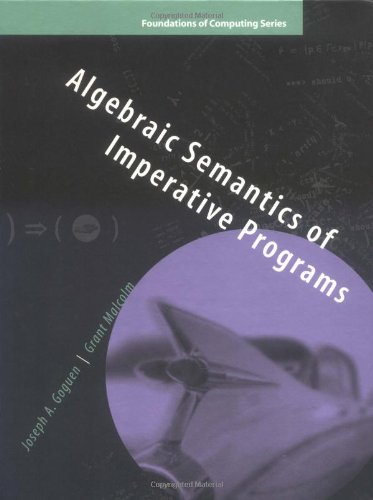 Algebraic Semantics of Imperative Programs presents a self-contained and novel "executable" introduction to formal reasoning about imperative programs. The authors' primary goal is to improve programming ability by improving intuition about what programs mean and how they run. The semantics of imperative programs is specified in a formal, implemented notation, the language OBJ; this makes the semantics highly rigorous yet simple, and provides support for the mechanical verification of program properties. OBJ was designed for algebraic semantics; its declarations introduce symbols for sorts and functions, its statements are equations, and its computations are equational proofs. Thus, an OBJ "program" is an equational theory, and every OBJ computation proves some theorem about such a theory. This means that an OBJ program used for defining the semantics of a program already has a precise mathematical meaning. Moreover, standard techniques for mechanizing equational reasoning can be used for verifying axioms that describe the effect of imperative programs on abstract machines. These axioms can then be used in mechanical proofs of properties of programs. Intended for advanced undergraduates or beginning graduate students, Algebraic Semantics of Imperative Programs contains many examples and exercises in program verification, all of which can be done in OBJ.