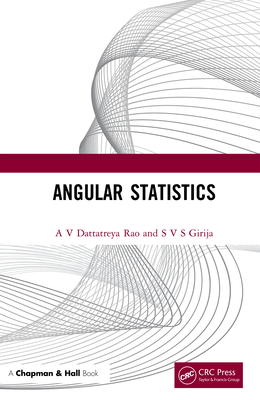 Directional data arise in the form of circular / semicircular / axial, symmetric / asymmetric, uni / bimodal data, in practical situations of varied fields. For the purpose of modeling such kind of data sets, the data scientists found that existing models as inadequate. As there is paucity of angular models, and to fill the gap, this book is designed at constructing new angular models with the existing techniques and to develop new tools of constructing angular models with an application to control charts in angular models.

This graduate level book will be useful for data scientists, researchers and research students of Statistics and allied fields.

A.V. Dattatreya Rao retired as Professor of Statistics and served at Acharya Nagarjuna University, Guntur from 1980 to 2017. He taught various subjects ranging from Statistical Inference, Multivariate Analysis, Pattern Recognition, Simulation Theory, Computer Programming to mention a few. His areas of interest are Pattern Recognition, Inference from incomplete data and Directional Data analysis. He has guided 10 Ph.D. theses. He published more than 100 research articles in National and International Journals. He delivered several invited talks at various conferences and UGC refresher courses and training programs. He is the life member of Indian society for Probability and Statistics (ISPS), Indian international statistical association (IISA) and Society for development of statistics. He is the fellow of AP Academy of sciences. He is the recipient of Best teacher award from government of Andhra Pradesh in 2011.

Dr. S.V.S. Girija is currently serving as Professor in the Department of Mathematics, Hindu College, Guntur. Her areas of research interest are Directional Data analysis and Numerical Analysis & computing. She has published 60 research papers in National and International Journals. She has guided 5 Ph.D. Scholars and 1 M.Phil. student. She is the life member of Indian society for Probability and Statistics (ISPS), Indian international statistical association (IISA) and AP Mathematical Society. She is the Associate Fellow of AP Academy of sciences. She is the recipient of Best teacher award from government of Andhra Pradesh in 2014.