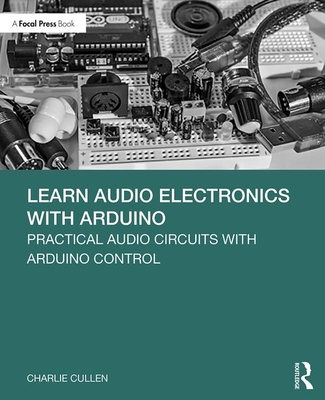 Learn Audio Electronics with Arduino: Practical Audio Circuits with Arduino Control teaches the reader how to use Arduino to control analogue audio circuits and introduces electronic circuit theory through a series of practical projects, including a MIDI drum controller and an Arduino-controlled two-band audio equalizer amplifier.

Learn Audio Electronics with Arduino provides all the theoretical knowledge needed to design, analyse, and build audio circuits for amplification and filtering, with additional topics like C programming being introduced in a practical context for Arduino control. The reader will learn how these circuits work and also how to build them, allowing them to progress to more advanced audio circuits in the future. Beginning with electrical fundamentals and control systems, DC circuit theory is then combined with an introduction to C programming to build Arduino-based systems for audio (tone sequencer) and MIDI (drum controller) output. The second half of the book begins with AC circuit theory to allow analogue audio circuits for amplification and filtering to be analysed, simulated, and built. These circuits are then combined with Arduino control in the final project - an Arduino-controlled two-band equalizer amplifier.

Building on high-school physics and mathematics in an accessible way, Learn Audio Electronics with Arduino is suitable for readers of all levels. An ideal tool for those studying audio electronics, including as a component within other fields of study, such as computer science, human-computer interaction, acoustics, music technology, and electronics engineering.

Charlie Cullen is Assistant Head of the School of Electrical & Electronic Engineering in the Technological University Dublin, Ireland.