Apollo in Perspective: Spaceflight Then and Now 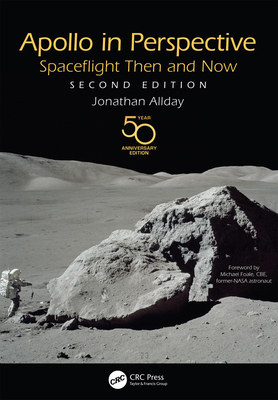 This special edition of Apollo in Perspective marks the 50th anniversary of the Apollo 11 moon landings in 1969. Updated and revised throughout, it takes a retrospective look at the Apollo space program and the technology that was used to land a man on the Moon. In addition there is a new chapter looking forward to the future of contemporary spaceflight in returning to the Moon (project Artemis) and going on to Mars.

Using simple illustrations and school-level mathematics, it explains the basic physics and technology of spaceflight, from how rockets work to the dynamics of orbits and how to simulate gravity in a rotating spacecraft. A mathematical appendix shows how some of the formulas can be derived.

This is an excellent introduction to astronautics for anyone interested in space and spaceflight.

Jonathan Allday teaches physics at Woodhouse Grove School where he is also Director of Digital Strategy.

After taking his first degree in physics at Cambridge, he moved to Liverpool University where he gained a PhD in particle physics in 1989. While carrying out his research, he joined with a group of academics and teachers working on an optional syllabus to be incorporated into A-level Physics. This new option was designed to bring students up to date on advances in particle physics and cosmology. An examining board accepted the syllabus in 1993 and now similar components appear on most advanced courses and some aimed at GCSE level.

Shortly after this, Jonathan started work on Quarks, Leptons and the Big Bang, published by CRC Press and now in its 3rd edition, which was intended as a rigorous but accessible introduction to these topics. Since then he has also written Apollo in Perspective; Quantum Reality; and Space-time: An Introduction to Einstein's Theory of Gravity also published by CRC, as well as co-authoring various textbooks for 16+ level, most prominently Advanced Physics from the well-respected OUP series of Advanced Science books. He is also active writing articles for Physics Review which is a journal intended for 16+ physicists.

Outside of teaching physics, Jonathan has a keen interest in cricket and Formula 1, although no ability in either sport. He and his wife Carolyn live in Yorkshire and spend a reasonable amount of time wandering the country following their three children in their sporting endeavours. While his eldest son somehow found his way into Accountancy via Psychology, his middle son is reading Physics at Bristol and his youngest is completing A levels and hoping to read philosophy.