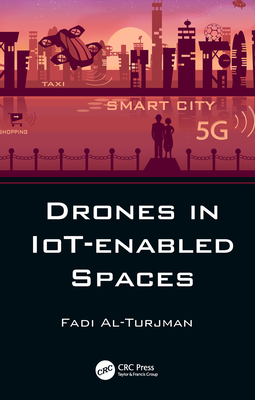 The Internet of Things (IoT) is a system of inter-connected devices, objects, and organisms. Among these devices, drones are gaining lots of interest. Drones are expected to communicate with cellular networks in the next generation networks (5G and beyond) which opens the door for another exciting research area. This book considers very important research areas in drone and cellular networks. It addresses major issues and challenges in drone-based solutions proposed for IoT-enabled cellular/computer networks, routing/communication protocols, surveillances applications, secured data management, and positioning approaches. It focuses mainly on smart and context-aware implementations.

Fadi Al-Turjman is a Professor at Antalya Bilim University, Turkey. He received his Ph.D. degree in computer science from Queen's University, Canada, in 2011. He is a leading authority in the areas of smart/cognitive, wireless and mobile networks' architectures, protocols, deployments, and performance evaluation. His record spans more than 180 publications in journals, conferences, patents, books, and book chapters, in addition to numerous keynotes and plenary talks at flagship venues. He has received several recognitions and best papers' awards at top international conferences, and led a number of international symposia and workshops in flagship ComSoc conferences. He is serving as the Lead Guest Editor in several journals including the IET Wireless Sensor Systems (WSS), MDPI Sensors and Wiley. He is also the publication chair for the IEEE International Conf. on Local Computer Networks (LCN'18). He is the sole author/editor for 7 recently published books about cognition and wireless sensor networks' deployments in smart environments with Taylor and Francis, and the Springer Nature (Top tier publishers in the area).