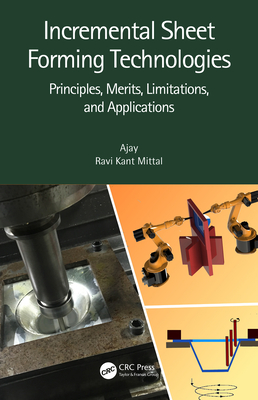 Incremental Sheet Forming (ISF) exempts use of dies and reduces cost for manufacturing complex parts. Sheet metal forming is used for producing high-quality components in automotive, aerospace, and medical industries. This book covers the benefits of this new technology, including the process parameters along with various techniques.

Each variant of this novel process is discussed along with the requirements of machinery and hardware. In addition, appropriate guidelines are also suggested regarding the relationship between process parameters and aspects of ISF process in order to ensure the applicability of the process on the industrial scale.

This book will be a useful asset for researchers, engineers in manufacturing industries, and postgraduate level courses.

Ajay is currently serving as an associate professor in the Mechanical Engineering Department, Faculty of Engineering and Technology, SGT University, Gurugram, Haryana, India. He received his Ph.D. in the field of Incremental Sheet Forming from Guru Jambheswer University of Science & Technology, Hisar, India. He completed his B.Tech. (Hons.) and M.Tech. (Distinction) from Maharshi Dayanand University, Rohtak, India. His areas of research include Incremental Sheet Forming, Additive Manufacturing, advanced manufacturing, and optimization techniques. He has over 25 publications in international journals of repute and refereed international conferences. He is supervising 3 Ph.D. and 2 M.Tech. scholars. He has a total of 8 years of experience in teaching and research. He has won several proficiency awards during the course of his career, including merit awards, best teacher awards, and so on.

AT SGT University, he is advisor of Association of Engineers and Technocrats (AET) and has also authored many in-house course notes, lab manuals, monographs and invited chapters in books. He has organized a series of Faculty Development Programmes, workshops, and seminar for researchers, UG and PG level students. He teaches the following courses at the graduate and post graduated level: Manufacturing Technology, Advanced Manufacturing Processes, Material Science, CAM, Operations Research, Optimization Techniques, Engineering Mechanics, Computer Graphics, Design of Experiments and research Methodology and so on. He is associated with many research, academic, and professional societies in various capacities.

began his academic career at Birla Institute of Technology and Science, Pilani (BITS Pilani), India, one of the top universities of India, in 1975 and retired from there as Senior Professor in 2018. He headed the offshore campus of BITS Pilani at Dubai, UAE, as Director and was also the Vice-Chancellor of a private university, K.R.Mangalam University, Gurugram, India for a term. In his academic endeavour, he has introduced, developed and taught a wide spectrum of courses in Mechanical Engineering, Computer Science and new courses in emerging and interdisciplinary areas, at the graduate and postgraduate levels, including product design, mechanical design, reliability engineering, control systems, systems modelling, robotics & intelligent systems, mechatronics, MEMS and nanotechnology. He is life member of IEEE and ACM.

At BITS Pilani, he had held a series of leadership positions including, Director (Special Projects); Deputy Director Administration; Dean, Academic Registration and Counselling Division and founder Chief, Computer Assisted Housekeeping Unit, IEEE Student Branch Counsellor, amongst others. He was instrumental in establishing BITS Alumni Association (BITSAA) and was its Founder President. He received B.E. (Hons.) & M.E. in Mechanical Engineering, and Ph.D. degrees from BITS Pilani, India. He obtained the highest rank in order of merit in M.E. and was awarded the Institute's Gold Medal.