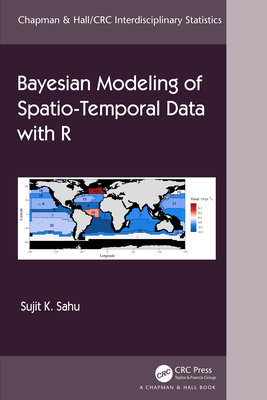 Applied sciences, both physical and social, such as atmospheric, biological, climate, demographic, economic, ecological, environmental, oceanic and political, routinely gather large volumes of spatial and spatio-temporal data in order to make wide ranging inference and prediction. Ideally such inferential tasks should be approached through modelling, which aids in estimation of uncertainties in all conclusions drawn from such data. Unified Bayesian modelling, implemented through user friendly software packages, provides a crucial key to unlocking the full power of these methods for solving challenging practical problems.

Key features of the book:

- Accessible detailed discussion of a majority of all aspects of Bayesian methods and computations with worked examples, numerical illustrations and exercises

- Included are R code notes detailing the algorithms used to produce all the tables and figures, with data and code available via an online supplement

- Throughout, the emphasis has been on validating models by splitting data into test and training sets following on the philosophy of machine learning and data science

This book is designed to make spatio-temporal modeling and analysis accessible and understandable to a wide audience of students and researchers, from mathematicians and statisticians to practitioners in the applied sciences. It presents most of the modeling with the help of R commands written in a purposefully developed R package to facilitate spatio-temporal modeling. It does not compromise on rigour, as it presents the underlying theories of Bayesian inference and computation in standalone chapters, which would be appeal those interested in the theoretical details. By avoiding hard core mathematics and calculus, this book aims to be a bridge that removes the statistical knowledge gap from among the applied scientists.

Sujit K. Sahu is a Professor of Statistics at the University of Southampton. He has co-authored more than 60 papers on Bayesian computation and modeling of spatio-temporal data. He has also contributed to writing specialist R packages for modeling and analysis of such data.