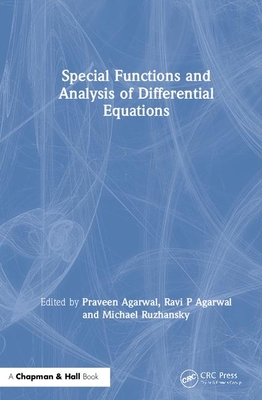 Differential Equations are very important tool in Mathematical Analysis. These are widely found in mathematics itself and in its applications to Statistics, computing, electrical circuit analysis, dynamical systems, economics, biology and so on. Recently there has been an increasing interest in and widely extended use of differential equations and systems of fractional order (that is, of arbitrary order), as better models of phenomena of various physics, engineering, automatization, biology and biomedicine, chemistry, earth science, economics, nature and so on. Now, new unified presentation and extensive development of special functions associated with fractional calculus are necessary tools, being related to the theory of differentiation and integration of arbitrary order (i.e., fractional calculus) and to the fractional order (or multi-order) differential and integral equations.

This book provides learners with the opportunity to develop an understanding of advancements of special functions and the skills needed to apply advanced mathematical techniques to solve complex differential equations and PDE's problems. Subject matters should be strongly related to special functions involving mathematical analysis and its numerous applications. The main objective of this book is to highlight the importance of fundamental results and techniques of the theory of complex analysis for differential equations and PDE's, and emphasizes articles devoted to the mathematical treatment of questions arising in physics, chemistry, biology, and engineering, particularly those that stress analytical aspects and novel problems and their solutions.

Specific topics include but are not limited to:

Praveen Agarwal is Professor at the Department of Mathematics, Anand International College of Engineering, Jaipur, India. On the editorial boards of several journals of repute and conducted, Professor Agarwal has conducted and attended a number of conferences. Recently, he has received the Most Outstanding Researcher 2018 award for his contribution to mathematics by the Union Minister of Human Resource Development of India. He has received numerous international research grants. He has published over 250 articles related to special functions, fractional calculus and mathematical physics in several leading mathematics journals. His latest research has focused on partial differential equations, fixed point theory and fractional differential equations.

Ravi P. Agarwal received his Ph.D. in mathematics from the Indian Institute of Technology, Madras, India. He is a professor of mathematics at the Florida Institute of Technology. His research interests include numerical analysis, inequalities, fixed point theorems, and differential and difference equations. He is the author/co-author of over 1000 journal articles and more than 25 books, and actively contributes to over 500 journals and book series in various capacities.

Michael Ruzhansky is a professor at the Department of Mathematics, Imperial College London. He has published over 100 research articles in several leading international journals. He has also published five books and memoirs and nine edited volumes. He has researched topics related to pseudo-differential operators, harmonic analysis and partial differential equations. More recently, he has worked on boundary value problems and their applications. He has been on the editorial board of many respected international journals and served as the President of the International Society of Analysis, Applications, and Computations (ISAAC) in the period 2009-2013.