Functional Analysis, Calculus of Variations and Numerical Methods for Models in Physics and Engineering 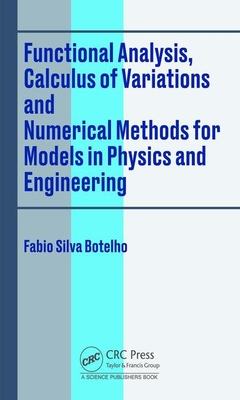 The book discusses basic concepts of functional analysis, measure and integration theory, calculus of variations and duality and its applications to variational problems of non-convex nature, such as the Ginzburg-Landau system in superconductivity, shape optimization models, dual variational formulations for micro-magnetism and others. Numerical Methods for such and similar problems, such as models in flight mechanics and the Navier-Stokes system in fluid mechanics have been developed through the generalized method of lines, including their matrix finite dimensional approximations. It concludes with a review of recent research on Riemannian geometry applied to Quantum Mechanics and Relativity.

The book will be of interest to applied mathematicians and graduate students in applied mathematics. Physicists, engineers and researchers in related fields will also find the book useful in providing a mathematical background applicable to their respective professional areas.

Fabio Silva Botelho obtained a Ph.D in Mathematics from Virginia Tech, USA in 2009. Prior to that got his undergraduate and master degrees in Aeronautical Engineering from the Technological Institute of Aeronautics, ITA, SP, Brazil, in 1992 and 1996 respectively. From 2004 to 2015 he was an Assistant Professor at the Mathematics Department of Federal University of Pelotas in Brazil. From May 2015 to the present date, he has worked as an Adjunct Professor at the Department of Mathematics of Federal University of Santa Catarina, in Florianopolis, SC, Brazil. His field of research is Functional Analysis, Calculus of Variations, Duality and Numerical Analysis applied to problems in physics and engineering. He has published two books Functional Analysis and Applied Optimization in Banach Spaces (2014) and Real Analysis and Applications (2018), both with Springer. He is also the author of a generalization of the Method of Lines, a numerical method for solving partial differential equations in which the domain of the equation in question is discretized in lines and the concerning solution is written on these lines as functions of the boundary conditions and the domain boundary shape.