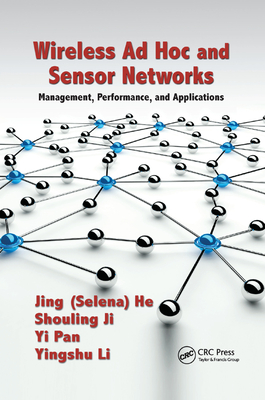 Although wireless sensor networks (WSNs) have been employed across a wide range of applications, there are very few books that emphasize the algorithm description, performance analysis, and applications of network management techniques in WSNs. Filling this need, Wireless Ad Hoc and Sensor Networks: Management, Performance, and Applications summarizes not only traditional and classical network management techniques, but also state-of-the-art techniques in this area.

The articles presented are expository, but scholarly in nature, including the appropriate history background, a review of current thinking on the topic, and a discussion of unsolved problems. The book is organized into three sections. Section I introduces the basic concepts of WSNs and their applications, followed by the summarization of the network management techniques used in WSNs. Section II begins by examining virtual backbone-based network management techniques. It points out some of the drawbacks in classical and existing methods and proposes several new network management techniques for WSNs that can address the shortcomings of existing methods. Each chapter in this section examines a new network management technique and includes an introduction, literature review, network model, algorithm description, theoretical analysis, and conclusion. Section III applies proposed new techniques to some important applications in WSNs including routing, data collection, data aggregation, and query processing. It also conducts simulations to verify the performance of the proposed techniques. Each chapter in this section examines a particular application using the following structure: brief application overview, application design and implementation, performance analysis, simulation settings, and comments for different test cases/scenario configurations.

Dr. Jing (Selena) He is currently the Assistant Professor in the Department of Computer Science at Kennesaw State University. She received her B.S. in Electric Engineering from Wuhan Institute of Technology and her M.S. of Computer Science from Utah State University, respectively. Her research interests include wireless ad hoc networks, wireless sensor networks, cyber-physical systems, social networks, and cloud computing. She is now an IEEE member and an IEEE COMSOC member.

Dr. Yi Pan is a professor and chair of the Department of Computer Science and a professor in the Department of Computer Information Systems at Georgia State University. Dr. Pan received his B.Eng. and M.Eng. in Computer Engineering from Tsinghua University, China, in 1982 and 1984, respectively, and his Ph.D. in Computer Science from the University of Pittsburgh, in 1991. Dr. Pan's research interests include parallel and distributed computing, optical networks, wireless networks, and bioinformatics. Dr. Pan has published more than 100 journal papers with about 50 papers published in various IEEE/ACM journals. He is a co-inventor of three U.S. patents (pending) and 5 provisional patents, and has received many awards from agencies such as NSF, AFOSR, JSPS, IISF and the Mellon Foundation. Dr. Pan has served as an editor-in-chief or editorial board member for 15 journals including 6 IEEE Transactions and a