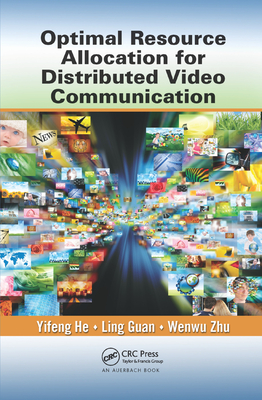 While most books on the subject focus on resource allocation in just one type of network, this book is the first to examine the common characteristics of multiple distributed video communication systems. Comprehensive and systematic, Optimal Resource Allocation for Distributed Video Communication presents a unified optimization framework for resource allocation across these systems.

Whether you're in industry or academia, you'll value how the book outlines current challenges facing the field and outlines a general solution framework for addressing these challenges. From problem formulations and theoretical analysis to practical algorithms, it facilitates the comprehensive understanding required to achieve optimized video and multimedia communications.

Detailing methods that can immediately improve the performance of your video communication systems, this book presents multiple applications of optimal resource allocation. For each of the applications,

Yifeng He has been an assistant professor in the Department of Electrical and Computer Engineering, Ryerson University, Canada, since July 2009. He received his Ph.D. degree from Ryerson University, Canada, in 2008, M.S. degree from Huazhong University of Science and Technology, China, in 2001, and B.S. degree from Tongji University, China, in 1994, respectively, all in Electrical Engineering. Dr. He was a research intern at Microsoft Research Asia in 2007, and a postdoctoral fellow at Ryerson University from 2008 to 2009. His research interests include Peer-to-Peer (P2P) video streaming, wireless video streaming, wireless sensor networks, and distributed optimizations for multimedia communications. Dr. He has published about 30 research papers in the field of multimedia communications. He is co-editing a book, entitled "Multimedia Image and Video Processing" (2nd Edition), to be published by CRC Press. Dr. He is the recipient of 2008 Canada Governor General's Gold Medal, and 2007 Best Paper Award of Pacific Rim Conference on Multimedia (PCM).

Ling Guan is a Tier I Canada Research Chair in Multimedia and Computer Technology, and a Professor of Electrical and Computer Engineering at Ryerson University, Toronto, Canada. He received his Bachelor's Degree from Tianjin University, China, Master's Degree from University of Waterloo, Canada and Ph.D. Degree from University of British Columbia, Canada. Dr. Guan has been working on image, video and multimedia signal processing and communication, and published extensively in the field. He currently serves on the editorial boards of IEEE Transactions on Circuits and Systems for Video Technology and numerous other international journals. He chaired the 2006 IEEE International Conference on Multimedia and Expo in Toronto, co-chaired the 2008 ACM International Conference on Image and Video Retrieval in Niagara Falls, and served as the Founding General Chair of IEEE Pacific-Rim Conference