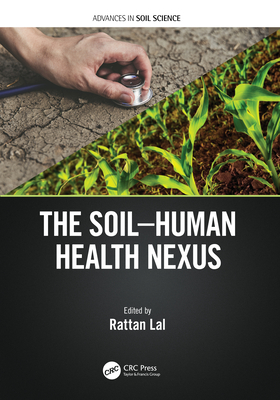 One of the notable ramifications of the Anthropocene is the growing risks of decline in soil health by anthropogenic activities. Important among these activities are deforestation, biomass burning, excessive soil tillage, indiscriminate use of agrochemicals, excessive irrigation by flooding or inundation, and extractive farming practices. Soil pollution, by industrial effluents and urban waste adversely impacts human health. Degradation of soil health impacts nutritional quality of food, such as the uptake of heavy metals or deficit of essential micro-nutrients, and contamination by pests and pathogens. Indirectly, soil health may impact human health through contamination of water and pollution of air.

This book aims to:

Discuss the nexus between soil degradation and malnourishment as well as the important links between soil, plant, animal and human health.

Detail reasons oil is a cause of infectious diseases and source of remedial measures.

Rattan Lal, Ph.D., is a Distinguished University Professor of Soil Science and Director of the Carbon Management and Sequestration Center, The Ohio State University, and an Adjunct Professor of University of Iceland. His current research focus is on climate-resilient agriculture, soil carbon sequestration, sustainable intensification, enhancing use efficiency of agroecosystems, and sustainable management of soil resources of the tropics. He has received honorary degrees of Doctor of Science from Punjab Agricultural University (2001), the Norwegian University of Life Sciences, Aas (2005), Alecu Russo Balti State University, Moldova (2010), Technical University of Dresden, Germany (2015), University of Lleida, Spain (2017), Gustavus Adolphus College, Saint Peter, Minnesota, and PUCV, Valparaiso, Chile (2019). He was president of the World Association of the Soil and Water Conservation (1987-1990), the International Soil Tillage Research Organization (1988-91), the Soil Science Society of America (2005-2007), and is President of International Union of Soil Science (2017-2018). He was a member of the Federal Advisory Committee on U.S. National Assessment of Climate Change-NCADAC (2010-2013), member of the SERDP Scientific Advisory Board of the US-DOE (2011-2018), Senior Science Advisor to the Global Soil Forum of Institute for Advanced Sustainability Studies, Potsdam, Germany (2010-2015), member of the Advisory Board of Joint Program Initiative of Agriculture, Food Security and Climate Change (FACCE-JPI) of the European Union (2013-2016), and Chair of the Advisory Board of Institute for Integrated Management of Material Fluxes and Resources of the United Nation University (UNU-FLORES), Dresden, Germany (2014-2019). Prof. Lal was a lead author of IPCC (1998-2000). He has mentored 115 graduate students, 54 postdoctoral researchers, and hosted 174 visiting scholars. He has authored/co-authored 950 referred journal articles, has written 20 and edited / co-edited 75 books. For 6 years (2014-2019), Reuter Thomson listed him among the world's most influential scientific minds and having citations of publications among top 1% of scientists in agricultural sciences. He is recipient of the 2018 GCHERA World Agriculture Prize, 2018 Glinka World Soil Prize, and 2019 Japan Prize.