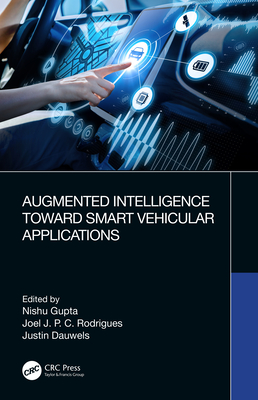 This up-to-date reference discusses important concepts of vehicular communication in intelligent transportation systems. Augmented Intelligence Toward Smart Vehicular Applications begins by discussing key objectives of intelligent transport systems and vehicular ad-hoc networks (VANETs). It then goes on to discuss challenges, applications and future trends in VANETs. The text focuses on the organization of artificial intelligence (AI) and aspects of deep learning algorithms, particularly multimodal transport. This book will serve as an ideal reference for graduate students and academic researchers in the field of electrical engineering, electronics and communication engineering and transportation engineering.

Nishu Gupta is currently working as an assistant professor, department of electronics and communication engineering at Vaagdevi College of Engineering, Warangal, India. He is specialized in the field of Communication and Networking. His major work is in the area of design and evaluation of MAC protocols to enhance safety applications in vehicular communication. He has published more than 32 research papers in journals of national and international repute. His research interest includes wireless communication, internet of things, internet of vehicles, autonomous vehicles, edge computing, augmented intelligence, vehicular communication, and cognitive radio Ad-hoc network. Joel J. P. C. Rodrigues is a professor and senior researcher at the National Institute of Telecommunications (Inatel), Brazil and senior researcher at the Instituto de Telecomunicações, Portugal. He has been a professor at the University of Beira Interior (UBI), Portugal and visiting professor at the University of Fortaleza (UNIFOR), Brazil. His main research interests include the Internet of Things and Sensor networks, e-health, vehicular communications, and mobile and ubiquitous computing. He is the editor-in-chief of three reputed International Journals and editorial board member of several high-reputed journals (IEEE Communications Magazine, IEEE Wireless Communications, IEEE IoT Journal, IEEE ACCESS, etc.). He has authored or coauthored over 550 papers in refereed international journals and conferences, 3 books, and 2 patents. Justin Dauwels is presently working as an associate professor of the School of Electrical and Electronic Engineering at the Nanyang Technological University (NTU) in Singapore. His research interests are in data analytics with applications to intelligent transportation systems, autonomous systems, and analysis of human behavior and physiology. He was a postdoctoral fellow at the RIKEN Brain Science Institute (2006-2007) and a research scientist at the Massachusetts Institute of Technology (2008-2010). He has been a JSPS postdoctoral fellow (2007), a BAEF fellow (2008), a Henri-Benedictus Fellow of the King Baudouin Foundation (2008), and a JSPS invited fellow (2010, 2011).