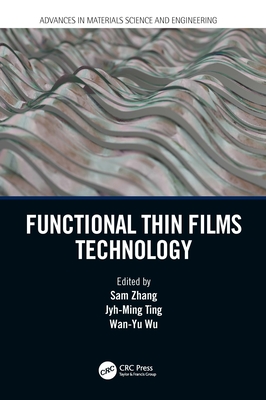 Professor Sam Zhang Shanyong （張善勇), better known as Sam Zhang, was born and brought up in the famous "City of Mountains" Chongqing, China. He received his Bachelor of Engineering in Materials in 1982 from Northeastern University (Shenyang, China), Master of Engineering in Materials in 1984 from Iron & Steel Research Institute (Beijing, China) and Ph.D. degree in Ceramics in 1991 from The University of Wisconsin-Madison, USA. He was a tenured full professor (since 2006) at the School of Mechanical and Aerospace Engineering, Nanyang Technological University. In January 2018, he joined School of Materials and Energy, Southwest University, Chongqing, China and assumed duty as Director of the Centre for Advanced Thin Film Materials and Devices of the university.

Dr. Jyh-Ming Ting is an AES Chair Professor of the Department of Materials Science and Engineering at National Cheng Kung University (NCKU) in Taiwan. He received a BS degree in Nuclear Engineering from National Tsing Hua University in Taiwan 1982, and completed MS and PhD works at the Department of Materials Science and Engineering in University of Cincinnati in 1987 and 1991, respectively. From 1990 to 1997, Dr. Ting worked at Applied Sciences, Inc. (ASI), as a Scientist and then the R&D Director. In August 1997, Dr. Ting became a faculty in NCKU working on various carbon materials and low-dimensional materials, and their (nano)composites. At the early stage, nano-scaled (composite) thin films and CNT were of interest. In particular, Prof. Ting developed and patented several novel techniques that allow the growth of aligned CNTs on metallic substrates, also holding the record of the growth rate until now. In recent years, in response to the serious issues related to environment, his research focuses on applying low-dimensional materials, mainly nanoparticles and 2D layered structures, and their composites, to energy generation/storage and photodegradation. More recently, Prof. is working in high entropy oxides. Prof. Ting has authored over 170 journal articles, given more than 30 invited talks and a few keynote speeches, holds more than 30 patents.

Dr. Wan-Yu Wu was born in Taipei, Taiwan. She obtained her Bachelor in 2000 and Ph.D. degrees in 2008 from Department of Materials Science and Engineering of National Cheng Kung University, Tainan, Taiwan. In 2010, Dr. Wu became an Assistant Professor in MingDao University in Taiwan where she was also a key member of the Surface & Engineering Research Center. In 2014, she joined the Department of Materials Science and Engineering in Da-Yeh University in Taiwan as an Associate Professor. Due to her well-recognized expertise in thin film and coating technology, Prof. Wu was commissioned to establish a Coatings Technology Research Center in Da-Yeh university. Over the years she has focused her research on thin film and nanostructure materials synthesized using HiPIMS deposition and wet chemistry processes, respectively. Prof. Wu also actively participates in professional society. She in the board of directors in Taiwan Association for Coating and Thin Film Technology (TACT). She also serves as a symposium chair in several international conferences including International Conference on Metallurgical Coatings and Thin Films (ICMCTF), ThinFilms Conference, and TACT International Thin Films Conference.