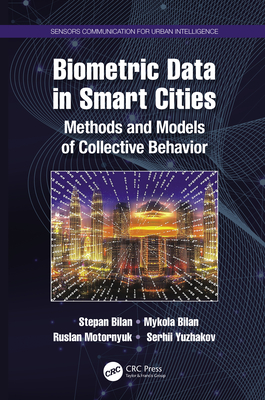 In modern conditions of the development of intelligent systems to solve the problems of smart cities, more and more attention is paid to the construction of distributed intelligent systems, which, based on a network of sensors and specialized calculators, help residents and visitors of the city in real time to solve a whole range of complex problems that arise in an urban environment. In a smart city, much attention is paid to the processing of biometric information that comes from biometric sensors distributed throughout the city. Such biometric systems are multimodal and allow you to control the general condition of a person, and also help a person to move around the city and predict events within the city.

This book describes methods for processing biometric information in a smart city environment. The theoretical foundations of building a biometric multisensor network, which allows you to create a unified urban biometric community, are considered. The theoretical foundations of the parallel shift technology and the Radon transformation on cellular automata with a hexagonal covering are presented. On the basis of these technologies, methods of biometric identification by gait parameters and the geometric shape of the auricle are described, which are effectively used in a smart city. A method for tracking dynamic changes in the state of a smart city in real time is considered. Models of behavior of colonies of living organisms, their formation, movement and interaction are described on the basis of the technology of cellular automata with active cells. Models of behavior of active cells in meeting with unwanted cells and models of combining and destruction of active cell colonies are also described.

This book is intended for undergraduate, graduate students and specialists working and conducting research in the field of biometric information processing, as well as in the development and construction of distributed intelligent systems.

Stepan Bilan works as an Associate Professor at the State University of Infrastructure and Technology (Kiev, Ukraine).

Mykola Bilan work as an informatics and physics teacher in a secondary school in the village of Mayak, Republic of Moldova.

Ruslan Motornyuk works as a leading engineer in the Production Unit "Kiev Department" branch of the Main Information and Computing Center of the JSC "Ukrzaliznytsya".

Serhii Yuzhakov has been working in the information technology divisions of various state institutions of Ukraine.