Introduction to Nutrition and Metabolism 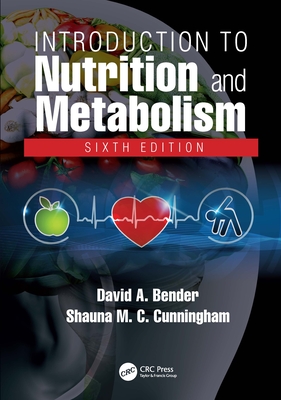 Introduction to Nutrition and Metabolism equips readers with an understanding of the scientific basis of what we call a healthy diet. Now in its sixth edition, this highly recognized textbook provides clear explanations of how nutrients are metabolized and gives the principles of biochemistry needed for comprehending the science of nutrition.

This full-color textbook explores the need for food and the uses to which food is put in the body, as well as the interactions between health and diet. Outlining the scientific basis behind nutritional requirements and recommendations, this new edition has been extensively revised to reflect current knowledge.

Following its predecessors, this sixth edition is relevant to any student or practitioner interested in how diet influences our health, including in the fields of nutrition, dietetics, medicine and public health.

David A. Bender was educated at North Ealing Primary School and Greenford County

in England from 1965 to 1968. He joined the Courtauld Institute of Biochemistry at the

Middlesex Hospital Medical School as a research assistant in 1968, was appointed as a

amino acids) from the University of London in 1971. The Middlesex Hospital Medical

School merged with University College London (UCL) in 1987, and he became a member

of the Department of Biochemistry and Molecular Biology at UCL. He was appointed as

He retired from UCL in 2011, with the title of Emeritus Professor. From 1994 until retirement,

he was the assistant faculty tutor to the medical students, and from 1998 he was

biochemistry, and he was a member of the working group on vitamins that formed part of

Energy and Nutrients for the United Kingdom, the European Union expert committee that

and the Food Safety Authority of Ireland working party on Safe Micronutrient Levels.

In addition to research publications, he has also written a number of books, including:

Academy in Irvine, Scotland, before undertaking undergraduate studies at Glasgow

University. She moved to Aberdeen University in 1991 to study for a PhD. This was

University Medical School, Japan, before she joined the Nutrition and Dietetics Teaching

University in Aberdeen. Shauna continues to teach student nutritionists and dietitians at

Robert Gordon University, with a particular interest in metabolism and its relationship