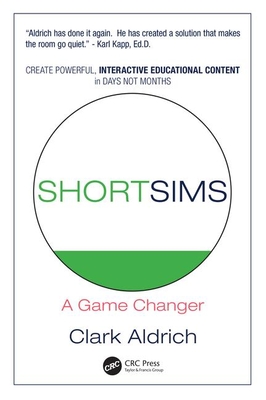 Short Sims: A Game Changer is the definitive guide to creating simple, highly efficient educational simulations for the next generation of learners.

Interactivity is the key to effective educational media in schools, corporations, the military, and government. And through this Short Sims methodology, interactive content is now no harder to produce than traditional linear content.

And the same Short Sim methodology can be applied to assessment, virtual reality, journalism, and complex educational simulations, and help in the planning of computer games.

Most recently, Aldrich has re-invented educational content with an interactive model called Short Sims, which is more effective and more engaging for the learners and faster to create and less expensive for the producers. Short Sims renders traditional approaches alone obsolete.

Prior to that, Aldrich introduced and popularized games and simulations for online learning, and then published Unschooling Rules, his fifth book, which redefined the culture of learning, has been cited by President Obama, and adopted by leading schools everywhere.

Aldrich has been called a 'guru' by Fortune Magazine and a 'maverick' by CNN.  Aldrich and his work have been featured in hundreds of sources, including CBS, ABC, The New York Times, USA Today, AP, Wall Street Journal, NPR, CNET, Business 2.0, BusinessWeek, and U.S. News and World Report.   He has written six books based on his first hand experiences, has a degree from Brown University in Cognitive Science, taught at a leading environment education foundation, has given numerous keynotes, and his patent and award winning programs have earned millions.

He grew up in Concord and Weston, Massachusetts, and is the ninth great-grandson of Governors John Winthrop and Thomas Dudley, first and second governors of the Massachusetts Bay Colony.