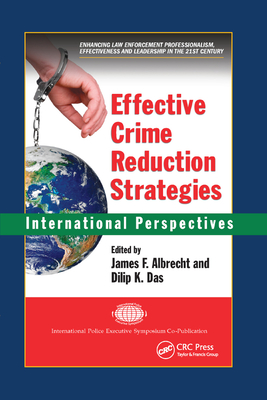 Thoroughly revised and updated since the initial proceedings, the reports in this volume are divided into six sections which explore a host of essential topics:

James F. Albrecht is presently serving in the joint United States and European Union Rule of Law Mission (EULEX) in Kosovo as the police chief in charge of all critical criminal investigations. Chief Albrecht had previously been assigned to the United Nations Police in Kosovo (former Yugoslavia) as an intelligence analyst and United States liaison to the European Union Police. Albrecht is also a 20 year veteran of the New York Police Department (NYPD).

Founding president of the International Police Executive Symposium (IPES) and founding editor of Police Practice and Research: An International Journal, Dilip K. Das has authored, edited, and co-edited more than 30 books and numerous articles. He has traveled extensively throughout the world in comparative police research, as a visiting professor in various universities, for organizing annual conferences of the IPES, and as a humanrights consultant to the United Nations. Dr. Das has received several faculty excellence awards and was a distinguished faculty lecturer.