Security and Organization Within Iot and Smart Cities 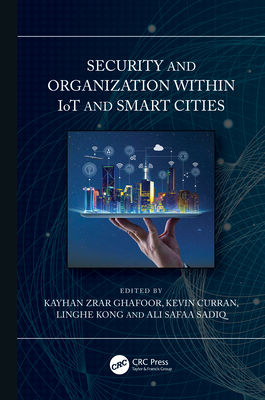 This book aims to provide the latest research developments and results in the domain of AI techniques for smart cyber ecosystems. It presents a holistic insight into AI-enabled theoretic approaches and methodology in IoT networking, security analytics using AI tools and network automation, which ultimately enable intelligent cyber space. This book will be a valuable resource for students, researchers, engineers and policy makers working in various areas related to cybersecurity and privacy for Smart Cities.

This book includes chapters titled "An Overview of the Artificial Intelligence Evolution and Its Fundamental Concepts, and Their Relationship with IoT Security", "Smart City: Evolution and Fundamental Concepts", "Advances in AI-Based Security for Internet of Things in Wireless Virtualization Environment", "A Conceptual Model for Optimal Resource Sharing of Networked Microgrids Focusing Uncertainty: Paving Path to Eco-friendly Smart Cities", "A Novel Framework for a Cyber Secure Smart City", "Contemplating Security Challenges and Threats for Smart Cities", "Self-Monitoring Obfuscated IoT Network", "Introduction to Side Channel Attacks and Investigation of Power Analysis and Fault Injection Attack Techniques", "Collaborative Digital Forensic Investigations Model for Law Enforcement: Oman as a Case Study", "Understanding Security Requirements and Challenges in the Industrial Internet of Things: A Review", "5G Security and the Internet of Things", "The Problem of Deepfake Videos and How to Counteract Them in Smart Cities", "The Rise of Ransomware Aided by Vulnerable IoT Devices", "Security Issues in Self-Driving Cars within Smart Cities", and "Trust-Aware Crowd Associated Network-Based Approach for Optimal Waste Management in Smart Cities".

This book provides state-of-the-art research results and discusses current issues, challenges, solutions and recent trends related to security and organization within IoT and Smart Cities. We expect this book to be of significant importance not only to researchers and practitioners in academia, government agencies and industries, but also for policy makers and system managers. We anticipate this book to be a valuable resource for all those working in this new and exciting area, and a "must have" for all university libraries.

Dr. Kayhan Zrar Ghafoor [S'10, M'15, SM'19] received the BSc degree in Electrical Engineering from Salahaddin University, the MSc degree in Remote Weather Monitoring from Koya University and the PhD degree in Wireless Networks from University Technology Malaysia in 2003, 2006, and 2011, respectively. He is working as associate professor in the Department of Software Engineering at Salahaddin University-Erbil, Kurdistan Region. He has published over 50 scientific/research papers in prestigious international journals and conferences. Dr. Kayhan served as a guest editor of the special issue Network Protocols and Algorithms for Vehicular Ad Hoc Networks for the MONET (Mobile Network & Applications). He is also served as an editor of a book entitled "Cognitive Networks: Applications and Deployments". He appeared as an Associate Editor, Editorial Board Member and reviewer for numerous international journals, served as a workshop general chair for international workshops and conferences, and worked as a TPC member for more than 40 international conferences. He is the receipt of the UTM Chancellor Award 48th UTM convocation in 2012. He also awarded UTM International Doctoral Fellowship (IDF) and Kurdistan Regional Government (KRG) scholarship (Ahmad Ismail Foundation). His current research interests include Big Data in VANET and Smart city, Network Function Virtualization, cybersecurity and Vehicular cloud computing. He is a senior member IEEE Communications Society, Internet Technical Committee (ITC), and International Association of Engineers (IAENG).

Dr. Kevin Curran BSc (Hons), PhD, SMIEEE, FBCS CITP, FHEA is a Professor of Cyber Security at Ulster University, Executive Co-Direction of the Legal Innovation Centre and group leader for the Ambient Intelligence & Virtual Worlds Research Group. His achievements include winning and managing UK & European Framework projects and Technology Transfer Schemes. Professor Curran has made significant contributions to advancing the knowledge and understanding of computer networking and systems, evidenced by over 800 conference, book chapters & journal publications. He is perhaps most well-known for his work on location positioning within indoor environments and Internet security. He one of the most frequently interviewed computer scientists in the UK/Ireland and regularly speaks to Global Media Outlets. He has been interviewed by Sky News, BBC, ITV, Guardian, Times, Independent, Wired, South China Morning Post, CBC, CNN, Daily Mail, Sputnik News, NY Times, Huffington Post, Techcrunch, Telegraph, LBC Radio & many more. His expertise has been acknowledged by invitations to present his work at international conferences, overseas universities and research laboratories. He was the recipient of an Engineering and Technology Board Visiting Lectureship for Exceptional Engineers and is an IEEE Technical Expert for Internet/Security matters since 2008. He currently holds a Royal Academy of Engineering/Leverhulme Trust Senior Research Fellowship awarded in 2016. Dr. Curran's stature and authority in the international community is demonstrated by his influence, particularly in relation to the direction of research in computer science. He has chaired sessions and participated in the organising committees for many highly-respected international conferences and workshops. He was the founding Editor in Chief of the International Journal of Ambient Computing and Intelligence and is also a member of numerous Journal Editorial boards and international conference organising committees. He has authored a number of books and is the recipient of various patents. He has served as an advisor to the British Computer Society in regard to the computer industry standards and is a member of BCS and IEEE Technology Specialist Groups and various other professional bodies.

Dr.Yunhao Liu, ACM Fellow and IEEE Fellow, MSU Foundation Professor of Department of Computer Science and Engineering at Michigan State University. He is also Changjiang Professor at Tsinghua University (No pay leave). Yunhao received his BS degree in Automation Department from Tsinghua University in 1995, and an MS and a Ph.D. degree in Computer Science and Engineering at Michigan State University in 2003 and 2004, respectively. He now serves as the Editor in Chief of ACM Transactions on Sensor Networks. Dr. Linghe Kong [S'09-M'13-SM'18] is currently a research professor in Shanghai Jiao Tong University. Before that, he was a postdoctoral fellow at Columbia University and McGill University. He received his PhD degree in Shanghai Jiao Tong University 2012, Master degree in TELECOM SudParis 2007, B. E. degree in Xidian University 2005. His research interests include wireless communications, sensor networks and mobile computing.

Dr. Ali Safaa Sadiq is currently a lecturer at the School of Mathematics and Computer Science, University of Wolverhampton, UK. Before that, he has served as senior lecturer at the Department of Computer Systems & Networking Department Faculty of Computer Systems & Software Engineering, Universiti Malaysia Pahang, Malaysia. Ali has received his PhD, M.Sc, and B.Sc degrees in Computer Science and degree in Computer Science at 2004, 2011, and 2014 respectively. Dr. Ali has awarded PRO-CHANCELLOR ACADEMIC AWARD as a best student in his batch for both master and PhD.