Number Theory: A Lively Introduction with Proofs, Applications, and Stories 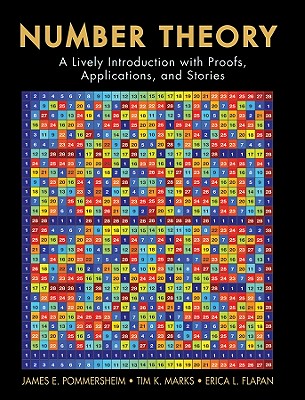 Number Theory: A Lively Introduction with Proofs, Applications, and Stories, is a new book that provides a rigorous yet accessible introduction to elementary number theory along with relevant applications.

Readable discussions motivate new concepts and theorems before their formal definitions and statements are presented. Many theorems are preceded by Numerical Proof Previews, which are numerical examples that will help give students a concrete understanding of both the statements of the theorems and the ideas behind their proofs, before the statement and proof are formalized in more abstract terms. In addition, many applications of number theory are explained in detail throughout the text, including some that have rarely (if ever) appeared in textbooks.

A unique feature of the book is that every chapter includes a math myth, a fictional story that introduces an important number theory topic in a friendly, inviting manner. Many of the exercise sets include in-depth Explorations, in which a series of exercises develop a topic that is related to the material in the section.

James Pommersheim is the Katharine Piggott Professor of Mathematics at Reed College. He held post-doctoral positions at the Institute for Advanced Study, M.I.T., and U.C. Berkeley, and he served on the mathematics faculty at New Mexico State University and Pomona College. Pommersheim has published research papers in a wide variety of areas, including algebraic geometry, number theory, topology, and quantum computation. He has enjoyed teaching number theory to students at many levels: college math and math education students, talented high school students, and advanced graduate students. Pommersheim earned his Ph.D. from the University of Chicago, where he studied under William Fulton.

Tim Marks is a Research Scientist at Mitsubishi Electric Research Laboratories in Cambridge, Massachusetts. Previously, he taught high school mathematics and physics for three years, and he worked for three years as a mathematics textbook editor at McDougal Littell/ Houghton Mifflin. Marks and Pommersheim have taught number theory at the Johns Hopkins University's Center for Talented Youth (CTY) summer program for 19 years. Marks earned his A.B. degree from Harvard University. He completed his Ph.D. and postdoctoral research at the University of California, San Diego.

Erica Flapan joined the mathematics department at Pomona College in 1986. She held post-doctoral positions at Rice University and the University of California, Santa Barbara. Flapan has taught a wide range of mathematics courses and has numerous publications in topology and its applications to chemistry, including her book When Topology Meets Chemistry. She developed a course entitled Problem Solving in the Sciences," which aims to teach students the mathematics they need in order to succeed in science and economics. Flapan obtained her Ph.D. in knot theory from the University of Wisconsin and is the Lingurn H. Burkhead Professor of Mathematics at Pomona College.