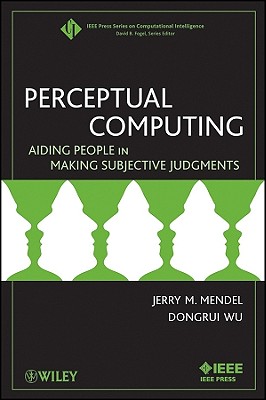 Lotfi Zadeh, the father of fuzzy logic, coined the phrase "computing with words" (CWW) to describe a methodology in which the objects of computation are words and propositions drawn from a natural language. Perceptual Computing explains how to implement CWW to aid in the important area of making subjective judgments, using a methodology that leads to an interactive device--a "Perceptual Computer"--that propagates random and linguistic uncertainties into the subjective judgment in a way that can be modeled and observed by the judgment maker.

This book focuses on the three components of a Perceptual Computer--encoder, CWW engines, and decoder--and then provides detailed applications for each. It uses interval type-2 fuzzy sets (IT2 FSs) and fuzzy logic as the mathematical vehicle for perceptual computing, because such fuzzy sets can model first-order linguistic uncertainties whereas the usual kind of fuzzy sets cannot. Drawing upon the work on subjective judgments that Jerry Mendel and his students completed over the past decade, Perceptual Computing shows readers how to:

Free MATLAB-based software is also available online so readers can apply the methodology of perceptual computing immediately, and even try to improve upon it. Perceptual Computing is an important go-to for researchers and students in the fields of artificial intelligence and fuzzy logic, as well as for operations researchers, decision makers, psychologists, computer scientists, and computational intelligence experts.

Jerry M. Mendel is Professor of Electrical Engineering at the University of Southern California. A Life Fellow of the IEEE and a Distinguished Member of the IEEE Control Systems Society, Mendel is also the recipient of many awards for his diverse research, including the IEEE Centennial Medal, the Fuzzy Systems Pioneer Award from the IEEE Computational Intelligence Society, and the IEEE Third Millennium Medal.

Dongrui Wu is a Postdoctoral Research Associate at the University of Southern California, where he recently obtained his PhD in electrical engineering.