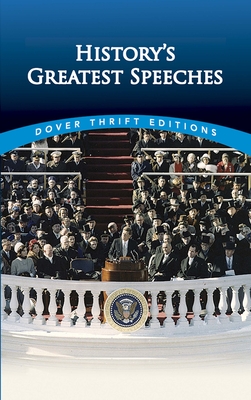 Ideal for classroom use, this anthology also provides a valuable tool for preparing or performing public speeches. Twenty of the world's most influential and stirring public lectures include Martin Luther King's "I Have a Dream" speech, Lincoln's Gettysburg Address, and Patrick Henry's "Give Me Liberty or Give Me Death " oration.
Additional speeches include Pericles' fifth-century BC funeral oration, George Washington's 1784 resignation speech, Martin Luther's 1520 address to the Diet of Worms, and Jonathan Edwards' 1741 sermon, "Sinners in the Hands of an Angry God." Other orations include Sojourner Truth's 1851 "Ain't I a Woman?" address, Frederick Douglass's 1852 "What to the Slave is the Fourth of July?" speech, Elie Wiesel's 1999 lecture on the perils of indifference, plus speeches by Eleanor Roosevelt, Winston Churchill, Mahatma Gandhi, Nelson Mandela, and other luminaries. Includes three selections from the Common Core State Standards Initiative: "I Have a Dream," "Gettysburg Address," and "What to the Slave is the Fourth of July?"