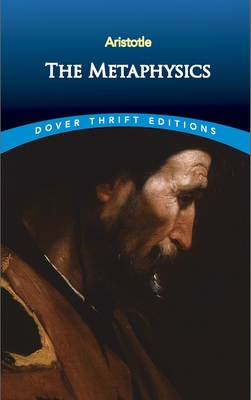 "All men by nature are actuated with the desire of knowledge," declared Aristotle. The philosopher's works are foundational to the history of science, and his treatise on metaphysics, or "first philosophy," is divided into sections of previous philosophical thought and theories; a refutation of skepticism; a demonstration of God's existence; an examination of the relation of metaphysics to the other sciences; an elucidation of the nature of the infinite; and other major philosophical issues.
The central theme consists of an inquiry into how substance may be defined as a category of being. The philosopher describes substance as both formal and material reality, and he discusses the relation between potentiality and actuality. An excellent example of Aristotle's dialectical method, which reasons from reliable opinions rather than known truths, this work offers a fine introduction to classical metaphysics.

Student of Plato and teacher of Alexander the Great, Aristotle (384-322 BCE) is a giant of Greek philosophy. He made significant contributions to a remarkable range of areas, including logic, metaphysics, mathematics, physics, biology, botany, ethics, politics, agriculture, medicine, dance, and theater. The founder of formal logic and a pioneer in zoology, Aristotle influenced every subsequent scientist and philosopher through his development of the scientific method.