The Robots Are Coming!: The Future of Jobs in the Age of Automation 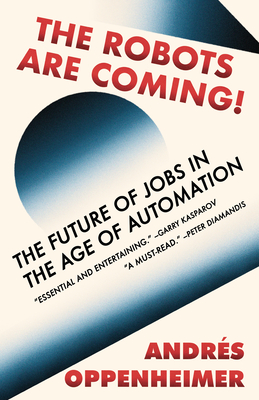 Staying true to his trademark journalistic approach, Andr s Oppenheimer takes his readers on yet another journey, this time across the globe, in a thought-provoking search to understand what the future holds for today's jobs in the foreseeable age of automation. The Robots Are Coming centers around the issue of jobs and their future in the context of rapid automation and the growth of online products and services. As two of Oppenheimer's interviewees -- both experts in technology and economics from Oxford University -- indicate, forty-seven percent of existing jobs are at risk of becoming automated or rendered obsolete by other technological changes in the next twenty years. Oppenheimer examines current changes in several fields, including the food business, legal work, banking, and medicine, speaking with experts in the field, and citing articles and literature on automation in various areas of the workforce. He contrasts the perspectives of "techno-optimists" with those of "techno-negativists" and generally attempts to find a middle ground between an alarmist vision of the future, and one that is too uncritical. A self-described "cautious optimist", Oppenheimer believes that technology will not create massive unemployment, but rather will drastically change what work looks like.

Andrés Oppenheimer is editor and syndicated foreign affairs columnist with The Miami Herald, anchor of Oppenheimer Presenta on CNN En Español, and author of seven books. Oppenheimer is the co-winner of the 1987 Pulitzer Prize as a member of The Miami Herald team that uncovered the Iran-Contra scandal. He won the Inter-American Press Association Award twice (1989 and 1994) and the 1997 award of the National Association of Hispanic Journalists. He is also the winner of the 1993 Ortega y Gasset Award of Spain's daily El País and the 1998 Maria Moors Cabot Prize of Columbia University.