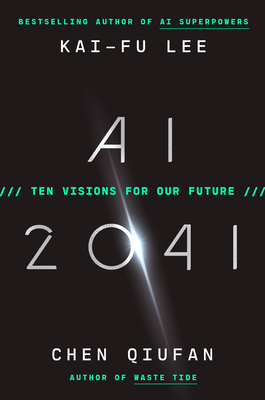 How will artificial intelligence change our world within twenty years? "This inspired collaboration between a pioneering technologist and a visionary writer of science fiction offers bold and urgent insights."--Yann LeCun, winner of the Turing Award; chief AI scientist, Facebook "Amazingly entertaining . . . Lee and Chen take us on an immersive trip through the future. . . . Eye-opening."--Mark Cuban

AI will be the defining development of the twenty-first century. Within two decades, aspects of daily human life will be unrecognizable. AI will generate unprecedented wealth, revolutionize medicine and education through human-machine symbiosis, and create brand-new forms of communication and entertainment. In liberating us from routine work, however, AI will also challenge the organizing principles of our economic and social order. Meanwhile, AI will bring new risks in the form of autonomous weapons and smart technology that inherits human bias. AI is at a tipping point, and people need to wake up--both to AI's radiant pathways and its existential perils for life as we know it. In this provocative, utterly original work, Kai-Fu Lee, the former president of Google China and bestselling author of AI Superpowers, teams up with celebrated novelist Chen Qiufan to imagine our world in 2041 and how it will be shaped by AI. In ten gripping short stories, they introduce readers to an array of eye-opening 2041 settings, such as: - In San Francisco, the "job reallocation" industry emerges as deep learning AI causes widespread job displacement
- In Tokyo, a music fan is swept up in an immersive form of celebrity worship based on virtual reality and mixed reality
- In Mumbai, a teenage girl rebels when AI's crunching of big data gets in the way of romance
- In Seoul, virtual companions with perfected natural language processing (NLP) skills offer orphaned twins new ways to connect
- In Munich, a rogue scientist draws on quantum computing, computer vision and other AI technologies in a revenge plot that imperils the world By gazing toward a not-so-distant horizon, AI 2041 offers urgent insights into our collective future--while reminding readers that, ultimately, humankind remains the author of its destiny.

Kai-Fu Lee is the CEO of Sinovation Ventures and New York Times bestselling author of AI Superpowers. Lee was formerly the president of Google China and a senior executive at Microsoft, SGI, and Apple. Co-chair of the Artificial Intelligence Council at the World Economic Forum, he has a bachelor's degree from Columbia and a PhD from Carnegie Mellon. Lee's numerous honors include being named to the Time 100 and Wired 25 Icons lists. He is based in Beijing. Chen Qiufan (aka Stanley Chan) is an award-winning author, translator, creative producer, and curator. He is the president of the World Chinese Science Fiction Association. His works include Waste Tide, Future Disease, and The Algorithms for Life. The founder of Thema Mundi, a content development studio, he lives in Beijing and Shanghai.