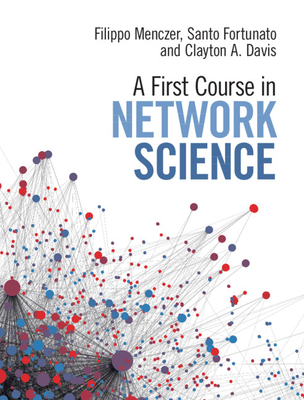 Networks are everywhere: networks of friends, transportation networks and the Web. Neurons in our brains and proteins within our bodies form networks that determine our intelligence and survival. This modern, accessible textbook introduces the basics of network science for a wide range of job sectors from management to marketing, from biology to engineering, and from neuroscience to the social sciences. Students will develop important, practical skills and learn to write code for using networks in their areas of interest - even as they are just learning to program with Python. Extensive sets of tutorials and homework problems provide plenty of hands-on practice and longer programming tutorials online further enhance students' programming skills. This intuitive and direct approach makes the book ideal for a first course, aimed at a wide audience without a strong background in mathematics or computing but with a desire to learn the fundamentals and applications of network science.

Filippo Menczer is Professor of Informatics and Computing at Indiana University, Bloomington. He is an ACM Distinguished Scientist and board member of the Indiana University Network Science Institute. He serves in editorial roles for several leading journals including Network Science, EPJ Data Science, and PeerJ: Computer Science. His research focuses on network science, computational social science, and Web science, with a focus on countering social media manipulation. His work on the spread of misinformation has received worldwide news coverage.

Santo Fortunato is Director of the Network Science Institute and Professor of Informatics at Indiana University, Bloomington. His current research is focused on network science, specifically network community detection, computational social science, and the 'science of science'. He received the German Physical Society's Young Scientist Award for Sociophysics and Econophysics in 2011 for his important contributions to the physics of social systems. He is Founding Chair of the International Conference on Computational Social Science (IC2S2).

Clayton A. Davis is an Informatics Ph.D. candidate at Indiana University, Bloomington and he holds B.S. and M.A. degrees in Mathematics. His research is concerned with the development of big-data platforms for social media analytics, machine learning algorithms for combating online abuse, design of crowdsourcing platforms, and the role of social media in social movements. His work on social bot detection was featured in major news outlets worldwide. His Web tools, including Botometer, Kinsey Reporter, and the Observatory on Social Media, answer millions of queries from thousands of users weekly. He won the 2017 Informatics Associate Instructor Award for his role in the development of high-quality teaching material for network science courses.