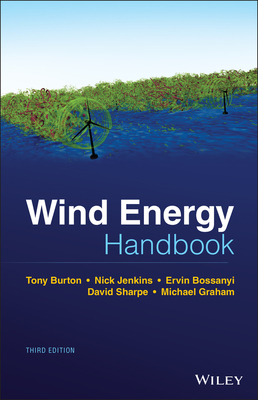 The newly revised Third Edition of the Wind Energy Handbook delivers a fully updated treatment of key developments in wind technology since the publication of the book's Second Edition in 2011. The criticality of wakes within wind farms is addressed by the addition of an entirely new chapter on wake effects, including 'engineering' wake models and wake control. Offshore, attention is focused for the first time on the design of floating support structures, and the new 'PISA' method for monopile geotechnical design is introduced.

The coverage of blade design has been completely rewritten, with an expanded description of laminate fatigue properties and new sections on manufacturing methods, blade testing, leading-edge erosion and bend-twist coupling. These are complemented by new sections on blade add-ons and noise in the aerodynamics chapters, which now also include a description of the Leishman-Beddoes dynamic stall model and an extended introduction to Computational Fluid Dynamics analysis.

The importance of the environmental impact of wind farms both on- and offshore is recognised by extended coverage, which encompasses the requirements of the Grid Codes to ensure wind energy plays its full role in the power system. The conceptual design chapter has been extended to include a number of novel concepts, including low induction rotors, multiple rotor structures, superconducting generators and magnetic gearboxes.

References and further reading resources are included throughout the book and have been updated to cover the latest literature. Importantly, the core subjects constituting the essential background to wind turbine and wind farm design are covered, as in previous editions. These include:

Perfect for engineers and scientists learning about wind turbine technology, the Wind Energy Handbook will also earn a place in the libraries of graduate students taking courses on wind turbines and wind energy, as well as industry professionals whose work requires a deep understanding of wind energy technology.

Tony Burton is a Civil Engineer recently retired from a post in offshore wind turbine support structure design with DNV GL in London, UK. He has worked for a major UK wind turbine manufacturer on the design, construction, commissioning, and operation of both medium and large-scale wind turbines.

Nick Jenkins is Professor of Renewable Energy at Cardiff University. He has over 14 years of industrial experience and is a Fellow of the IET, IEEE, and Royal Academy of Engineering.

Ervin Bossanyi is Senior Principal Researcher in renewables at DNV GL in Bristol, United Kingdom. He is also Visiting Professor at the University of Bristol. He received the Scientific Award of the European Academy of Wind Energy for outstanding contributions to the development of wind energy.

David Sharpe is a Researcher in wind turbine aerodynamics, having previously been Senior Lecturer in aeronautical engineering at Queen Mary College and then Senior Research Fellow at the Centre for Renewable Energy Systems Technology at Loughborough University. He is currently a visiting Professor at Strathclyde University.

Michael Graham is Professor in the Faculty of Engineering, Department of Aeronautics at Imperial College in London, UK. His research foci are on environmental flows, computational fluid dynamics, and marine technology.