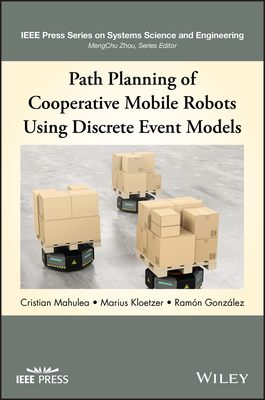 Generating feasible paths or routes between a given starting position and a goal or target position--while avoiding obstacles--is a common issue for all mobile robots. This book formulates the problem of path planning of cooperative mobile robots by using the paradigm of discrete-event systems. It presents everything readers need to know about discrete event system models--mainly Finite State Automata (FSA) and Petri Nets (PN)--and methods for centralized path planning and control of teams of identical mobile robots.

Path Planning of Cooperative Mobile Robots Using Discrete Event Models begins with a brief definition of the Path Planning and Motion Control problems and their state of the art. It then presents different types of discrete models such as FSA and PNs. The RMTool MATLAB toolbox is described thereafter, for readers who will need it to provide numerical experiments in the last section. The book also discusses cell decomposition approaches and shows how the divided environment can be translated into an FSA by assigning to each cell a discrete state, while the adjacent relation together with the robot's dynamics implies the discrete transitions.

Path Planning of Cooperative Mobile Robots Using Discrete Event Models is an ideal book for undergraduate and graduate students and college and university professors in the areas of robotics, artificial intelligence, systems modeling, and autonomous control.

CRISTIAN MAHULEA, PHD, has participated in the development and implementation of Petri Net Toolbox and SimHPN, two MATLAB software for simulation, analysis and synthesis of discrete-event systems modeled with Petri Nets. His research interests include discrete event systems, hybrid systems, automated manufacturing, Petri nets, mobile robotics and healthcare systems. He participated in the development of RMTool, a collection of tools for modeling, path planning and motion control of mobile robots.

MARIUS KLOETZER, PHD, developed two laboratory robotic platforms (at Boston University, USA, and at Technical University of Iasi, Romania) for facilitating real time experiments based on the proposed formal solutions. He is also participating in the development and extension of RMTool software package. His research interests include planning of mobile robots based on discrete abstractions and expressive specifications.

RAMÓN GONZÁLEZ, PHD, is the founder and CEO of robonity, an MIT innovation-driven startup. Ramon is an authority on robotics and engineering whose skills have been demonstrated in some of the most important engineering centers in the world including a 3-year research position at the MIT Robotic Mobility Group. He has received several awards including the Medal of the Royal Academy of Engineering of Spain and the Medal of Andalucia (first in history to an engineer in robotics). He holds a PhD in robotics and an engineering degree in computer science by the University of Almeria (Spain) and a certificate in accounting and finance by the Imperial College Business School (UK).