Speaking Being: Werner Erhard, Martin Heidegger, and a New Possibility of Being Human 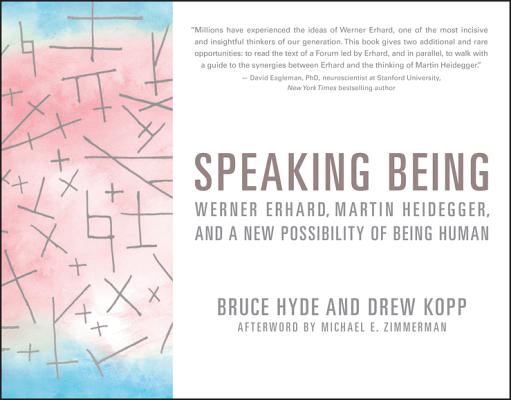 Speaking Being: Werner Erhard, Martin Heidegger, and a New Possibility of Being Human is an unprecedented study of the ideas and methods developed by the thinker Werner Erhard. In this book, those ideas and methods are revealed by presenting in full an innovative program he developed in the 1980s called The Forum--available in this book as a transcript of an actual course led by Erhard in San Francisco in December of 1989. Since its inception, Erhard's work has impacted the lives of millions of people throughout the world. Central to this study is a comparative analysis of Erhard's rhetorical project, The Forum, and the philosophical project of Martin Heidegger. Through this comparative analysis, the authors demonstrate how each thinker's work sometimes parallels and often illuminates the other.

The dialogue at work in The Forum functions to generate a language which speaks being. That is, The Forum is an instance of what the authors call ontological rhetoric a technology of communicating what cannot be said in language. Nevertheless, what does get said allows those participating in the dialogue to discover previously unseen aspects of what it currently means to be human. As a primary outcome of such discovery, access to creating a new possibility of what it is to be human is made available.

The purpose of this book is to show how communication of the unspoken realm of language--speaking being--is actually accomplished in The Forum, and to demonstrate how Erhard did it in 1989. Through placing Erhard's language use next to Heidegger's thinking--presented in a series of "Sidebars" and "Intervals" alongside The Forum transcript--the authors have made two contributions. They have illuminated the work of two thinkers, who independently developed similar forms of ontological rhetoric while working from very different times and places. Hyde and Kopp have also for the first time made Erhard's extraordinary form of ontological rhetoric available for a wide range of audiences, from scholars at work within a variety of academic disciplines to anyone interested in exploring the possibility of being for human beings.

I regard Speaking Being as an enormously important contribution to understanding Heidegger and Erhard. The latter has received far too little serious academic attention, and this book begins to make up for that lack. Moreover, the book's analysis of Heidegger's thought is among the best that I have ever read. I commend this book to all readers without reservation.

Dr. Drew Kopp is an Associate Professor in the Writing Arts department at Rowan University. With a research interest focused on the theory and history of rhetorical pedagogies. Dr. Kopp has published articles in prominent journals in the field of rhetoric and writing studies, including Rhetoric Review (2013), JAC: Rhetoric, Writing, Culture, Politics (2012), and Kairos (2010). He also contributed to the edited collection Disrupting Pedagogies in the Knowledge Society (2011).

Dr. Bruce Hyde was a Professor of Communication Studies at St. Cloud State University until his death on October 13th, 2015. His primary interests as an educator have been the ontological dimensions of language and communication; and dialogue as a non-polarized and non-polarizing form of public discourse.