A Companion to Chomsky 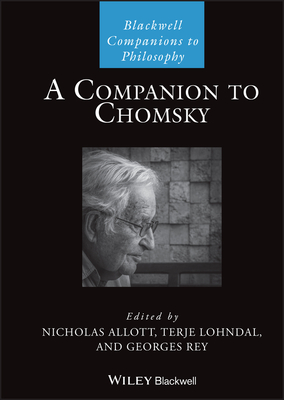 Noam Chomsky is first and foremost a linguist, but his revolutionary ideas about grammar have had a profound impact upon philosophy and the new field of cognitive science that emerged in large part from his work. Balancing theoretical rigor with accessibility to the non-specialist, this collection of 43 original essays from a diverse international team of linguists and philosophers offers comprehensive coverage of his contributions to universal grammar, language acquisition, linguistic diversity, semantics and speech pragmatics, as well as to philosophy of language, science and mind. The text is organized into sections that include:

Special efforts have been made to explain technical terms and issues as they arise.

A new addition to the acclaimed Wiley Blackwell Companions to Philosophy series, A Companion to Chomsky is an indispensable resource for philosophers, linguists, psychologists, advanced undergraduate and graduate students, and general readers with interest in the life and legacy of Noam Chomsky.

Nicholas Allott is Senior Lecturer in English language at the University of Oslo. His work focuses on pragmatics, inference and rationality in communication, word meaning and lexical modulation, legal language and interpretation, and the philosophy of linguistics. His publications include (with Neil Smith) Chomsky: Ideas and Ideals (2016).

Terje Lohndal is Professor of English Linguistics at NTNU Norwegian University of Science and Technology and Adjunct Professor at UiT The Arctic University of Norway. His main areas of research are comparative grammar, multilingualism, and the history of generative linguistics. He has published some sixty papers, and several books, among them, Phrase structure and argument Structure: a case study of the syntax-semantics interface (2014) and Formal Grammar (2017).

Georges Rey is a Professor of Philosophy at the University of Maryland at College Park. He has written extensively on the foundations of cognitive science, including more than sixty articles and two books, Contemporary Philosophy of Mind (1997) and Representation of Language: Philosophical Issues in a Chomskyan Linguistics (2020).