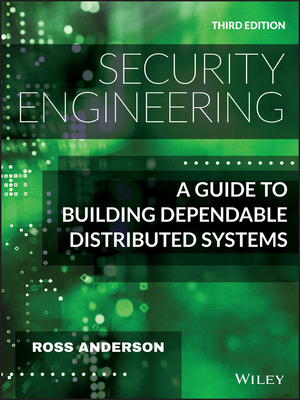 Now that there's software in everything, how can you make anything secure? Understand how to engineer dependable systems with this newly updated classic

This book became a best-seller in 2001 and helped establish the discipline of security engineering. By the second edition in 2008, underground dark markets had let the bad guys specialize and scale up; attacks were increasingly on users rather than on technology. The book repeated its success by showing how security engineers can focus on usability.

Now the third edition brings it up to date for 2020. As people now go online from phones more than laptops, most servers are in the cloud, online advertising drives the Internet and social networks have taken over much human interaction, many patterns of crime and abuse are the same, but the methods have evolved. Ross Anderson explores what security engineering means in 2020, including:

The third edition of Security Engineering ends with a grand challenge: sustainable security. As we build ever more software and connectivity into safety-critical durable goods like cars and medical devices, how do we design systems we can maintain and defend for decades? Or will everything in the world need monthly software upgrades, and become unsafe once they stop?

ROSS ANDERSON is Professor of Security Engineering at Cambridge University in England. He is widely recognized as one of the world's foremost authorities on security. In 2015 he won the Lovelace Medal, Britain's top award in computing. He is a Fellow of the Royal Society and the Royal Academy of Engineering. He is one of the pioneers of the economics of information security, peer-to-peer systems, API analysis and hardware security. Over the past 40 years, he has also worked or consulted for most of the tech majors.