Introduction to the Analysis of Electromechanical Systems 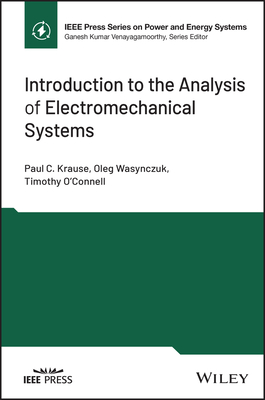 In Introduction to the Analysis of Electromechanical Systems, an accomplished team of engineers delivers an accessible and robust analysis of fundamental topics in electrical systems and electrical machine modeling oriented to their control with power converters. The book begins with an introduction to the electromagnetic variables in rotatory and stationary reference frames before moving onto descriptions of electric machines.

The authors discuss direct current, round-rotor permanent-magnet alternating current, and induction machines, as well as brushless direct current and induction motor drives. Synchronous generators and various other aspects of electric power system engineering are covered as well, showing readers how to describe the behavior of electromagnetic variables and how to approach their control with modern power converters.

Introduction to the Analysis of Electromechanical Systems presents analysis techniques at an introductory level and at sufficient detail to be useful as a prerequisite for higher level courses. It also offers supplementary materials in the form of online animations and videos to illustrate the concepts contained within. Readers will also enjoy:

Perfect for researchers and industry professionals in the area of power and electric drives, Introduction to the Analysis of Electromechanical Systems will also earn its place in the libraries of senior undergraduate and graduate students and professors in these fields.

Paul C. Krause, PhD, retired after 39 years as a professor at Purdue University School of Electrical and Computer Engineering. He founded P.C. Krause & Associates in 1983. He is a Life Fellow of IEEE and has authored or co-authored over 100 technical papers and five textbooks on electric machines. He was the 2010 recipient of the IEEE Nikola Tesla Award. He and the co-authors are also co-authors of Electromechanical Motion Devices: Rotating Magnetic Field-Based Analysis with Online Animations, 3rd Edition.

Oleg Wasynczuk, PhD, is Professor of Electrical and Computer Engineering at Purdue University. He has authored or co-authored over 100 technical papers and four textbooks on electric machines. He is a Fellow of IEEE and was the 2008 recipient of the IEEE Cyril Veinott Award. He also serves as Chief Technical Officer of P.C. Krause & Associates.

Timothy O'Connell, PhD, is a Senior Lead Engineer at P.C. Krause & Associates and an Adjunct Research Assistant Professor of Electrical and Computer Engineering at the University of Illinois at Urbana-Champaign. He is a Senior Member of IEEE and an Associate Editor of the IEEE Transactions on Aerospace and Electronic Systems. He has authored or co-authored over 20 technical papers and three textbooks on electric machines and has co-edited a book on electrified aircraft propulsion.