Advances in Processing Technologies for Bio-Based Nanosystems in Food 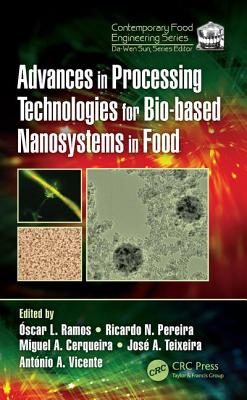 This book provides an overview of the most recent advances made on the field of nanoscience and nanotechnology that significantly influenced the food industry. It provides a multidisciplinary review of the complex mechanisms involved in the research, development, production, and legislation of food containing nanostructure systems. Selected examples of nanotechnology applications in food industry are shown, focusing on advanced aspects of food packaging, processing, and preservation; followed by one contribution that presents the potential commercialization and the main challenges for scale-up.

Óscar Leandro da Silva Ramos earned a BSc in Microbiology from the Portuguese Catholic University, Porto, Portugal, and a PhD in Technological and Engineering Sciences with a specialization in Biochemical Engineering from the New University of Lisbon, Lisboa, Portugal. He is now a postdoctoral researcher at the Centre for Biological Engineering (CEB) of Minho University, Braga, Portugal, and at the Department of Chemical Engineering, University of Porto, Porto, Portugal. He has authored or coauthored more than 20 papers in peer-reviewed journals in the field of food science and technology and 6 chapters in edited books. He also has participated in more than 30 international conferences and workshops worldwide and done more than 40 oral and poster presentations.
Ricardo Nuno Correia Pereira graduated in 2003 with a degree in Food Engineering from the Portuguese Catholic University in Porto, Portugal, and earned his PhD in Chemical and Biological Engineering in 2011 at the University of Minho in Braga, Portugal. During his career as a young researcher, he has participated in several research projects, both nationally and internationally, in the food industry. He has worked as a consultant (professionally and educationally) for a number of private and public sector clients related to food technology. Before earning his PhD, he earned an MSc in Biotechnology-Bioprocess Engineering in 2007 from the University of Minho in Braga, Portugal.
Miguel Ângelo Parente Ribeiro Cerqueira graduated with a degree in Chemical and Biological Engineering from the University of Minho (UM), where he earned two scholar merit awards (2002 and 2003) and a scholarship merit award (2005) during graduation. He earned his PhD in December 2010 and received an award for the best PhD thesis in 2011 from the School of Engineering of UM. Since April 2011, he has been a postdoctoral researcher at UM. To date, he has published more than 45 papers in peer reviewed journals, 1 patent, 5 papers in nonpeer-reviewed journals, 12 book chapters, 12 extended abstracts in international conferences, 52 abstracts in international conferences, and 18 abstracts in national conferences.
José A. Teixeira, PhD, is a professor and currently the head of the Biological Engineering Department (DEB) of the Engineering School of Minho University. The biological engineering department is responsible for scientific research and teaching in the areas of biological and chemical engineering. The DEB carries out research in food safety and processing, environmental biotechnology and sustainable development, industrial biotechnology and chemistry, and health biotechnology. Professor Teixeira focused his research activities on two main topics--fermentation technology (multiphase bioreactors, in particular) and food technology. A more recent area of interest is food nanotechnology as well as the production of bioactive compounds for food and medical application.
António A. Vicente, PhD, graduated with a degree in Food Engineering in 1994 from the Portuguese Catholic University, in Porto, Portugal, and completed his PhD in Chemical and Biological Engineering in 1998 from the University of Minho, in Braga, Portugal. He received his Habilitation in 2010 from the University of Minho. From early in his career, he has kept a close contact with the food industry, and he is involved in several research projects, both national and international, together with industrial partners either as a participant or as a project leader. His main research interests are food processing by ohmic heating/moderate electric fields (namely, the study of the effects of electric currents on biomolecules and cells) and fermentation technology (including design and operation of bioreactors).