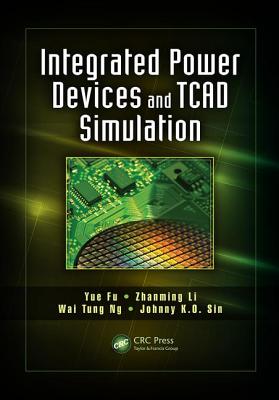 Including a virtual process flow for smart PIC technology as well as a hard-to-find technology development organization chart, Integrated Power Devices and TCAD Simulation gives students and junior engineers a head start in the field of power semiconductor devices while helping to fill the gap between power device engineering and power management systems.

Yue Fu obtained his Ph.D from the University of Central Florida, Orlando, USA and his BS from Zhejiang University, China. He is currently the vice president of Crosslight Software, Inc., Vancouver, British Columbia, Canada. Dr. Fu is a senior member of IEEE and has more than ten years of industry and academic experience in power semiconductor devices and power electronics. He holds multiple US patents and has authored or co-authored numerous peer-reviewed papers.

obtained his Ph.D from the University of British Columbia, Vancouver, Canada in 1988. He was with the National Research Council of Canada (NRCC) from 1988 to 1995, where he developed semiconductor device simulation software. In 1995, he founded Crosslight Software, Inc., Vancouver, British Columbia, Canada with simulation technology transferred from the NRCC. Since then, Dr. Li has been the chief designer of many semiconductor process and device simulation software packages. He has been actively involved in research of TCAD simulation technology and authored or coauthored over 70 research papers.

received his BAS, MAS, and Ph.D in electrical engineering from the University of Toronto, Ontario, Canada in 1983, 1985, and 1990, respectively. He was a member of technical staff at Texas Instruments, Dallas, USA from 1990 to 1991. He started his academic career at the University of Hong Kong in 1992. Dr. Ng returned to the University of Toronto as a faculty member in 1993 and is currently a full professor. His research is focused on the areas of power management integrated circuits, integrated DC-DC converters, smart power integrated circuits, power semiconductor devices, and fabrication processes.

obtained his BAS, MAS, and Ph.D in electrical engineering from the University of Toronto, Ontario, Canada in 1981, 1983, and 1988, respectively. He was a senior member of the research staff of Philips Research North America, Briarcliff Manor, New York, USA from 1988 to 1991. He joined the Department of Electronic and Computer Engineering at the Hong Kong University of Science and Technology in 1991 and is currently a full professor. An IEEE fellow, Dr. Sin is the holder of 13 patents and author of over 280 technical papers. His research interests include novel power semiconductor devices and power system-on-chip technologies.