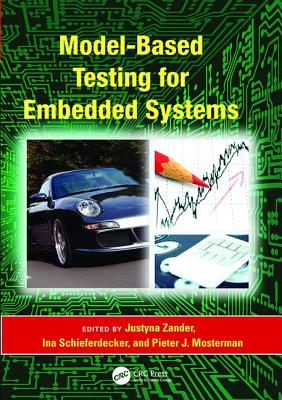 What the experts have to say about Model-Based Testing for Embedded Systems:

"This book is exactly what is needed at the exact right time in this fast-growing area. From its beginnings over 10 years ago of deriving tests from UML statecharts, model-based testing has matured into a topic with both breadth and depth. Testing embedded systems is a natural application of MBT, and this book hits the nail exactly on the head. Numerous topics are presented clearly, thoroughly, and concisely in this cutting-edge book. The authors are world-class leading experts in this area and teach us well-used and validated techniques, along with new ideas for solving hard problems.

"It is rare that a book can take recent research advances and present them in a form ready for practical use, but this book accomplishes that and more. I am anxious to recommend this in my consulting and to teach a new class to my students."

"This handbook is the best resource I am aware of on the automated testing of embedded systems. It is thorough, comprehensive, and authoritative. It covers all important technical and scientific aspects but also provides highly interesting insights into the state of practice of model-based testing for embedded systems."

"As model-based testing is entering the mainstream, such a comprehensive and intelligible book is a must-read for anyone looking for more information about improved testing methods for embedded systems. Illustrated with numerous aspects of these techniques from many contributors, it gives a clear picture of what the state of the art is today."

--Dr. Bruno Legeard, CTO of Smartesting, professor of Software Engineering at the University of Franche-Comt , Besan on, France, and co-author of Practical Model-Based Testing

Justyna Zander is a postdoctoral research scientist at Harvard University (Harvard Humanitarian Initiative) in Cambridge (Boston Area) MA, USA (since 2009) and Project Manager at the Fraunhofer Institute for Open Communication Systems in Berlin, Germany (since 2004).

She holds Ph.D. (2008) and M.Sc. (2005), both in the fields of Computer Science and Electrical Engineering from Technical University Berlin in Germany, B.Sc. (2004) in Computer Science, and B.Sc. in Environmental Protection and Management from Gdansk University of Technology in Poland (2003).

Ina Schieferdecker studied Mathematical Computer Science at Humboldt-University Berlin and did her Ph.D. in 1994 at Technical University Berlin on performance-extended specifications and analysis of Quality of Service characteristics. Since 1997, she is heading the Competence Center for Testing, Interoperability and Performance (TIP) at the Fraunhofer Institute on Open Communication Systems (FOKUS), Berlin and is heading now the Competence Center Modelling and Testing for System and Service Solutions (MOTION).

She is Professor on Engineering and Testing of Telecommunication Systems at Technical University Berlin since 2003.

Prof. Schieferdecker works since 1994 in the area of design, analysis, testing and evaluation of communication systems using specification-based techniques like Unified Modeling Language, Message Sequence Charts and Testing and Test Control Notation (TTCN-3). Prof. Schieferdecker authored many scientific publications in the area of system development and testing. She is co-founder of the Testing Technologies IST GmbH, Berlin and member of the German Testing Board. She received in 2004 the Alfried Krupp von Bohlen und Halbach Award for Young Professors and became member of the German Academy of Technical Sciences in 2009. Her work on this book has partially being supported by the Alfried Krupp von Bohlen und Halbach Stiftung.

Pieter J. Mosterman is a Senior Research Scientist at MathWorks in Natick, MA where he works on core Simulink(R) simulation and code generation technologies and an Adjunct Professor at the School of Computer Science of McGill University. Before, he was a Research Associate at the German Aerospace Center (DLR) in Oberpfaffenhofen. He has a Ph.D. degree in Electrical and Computer Engineering from Vanderbilt University in Nashville, TN, and a M.Sc. degree in Electrical Engineering from the University of Twente, Netherlands. His primary research interests are in Computer Automated Multiparadigm Modeling (CAMPAM) with principal applications in design automation, training systems, and fault detection, isolation, and reconfiguration. He designed the Electronics Laboratory Simulator, nominated for The Computerworld Smithsonian Award by Microsoft Corporation in 1994. In 2003, he was awarded the IMechE Donald Julius Groen Prize for a paper on HyBrSim, a hybrid bond graph modeling and simulation environment. Prof. Mosterman received the The Society for Modeling and Simulation International (SCS) Distinguished Service Award in 2009 for his services as Editor-in-Chief of SIMULATION: Transactions of SCS. Dr. Mosterman is or was involved as Associate Editor with the International Journal of Critical Computer Based Systems, the Journal of Defense Modeling and Simulation, the International Journal of Control and Automation, Applied Intelligence, and IEEE Transactions on Control Systems Technology (TCST).