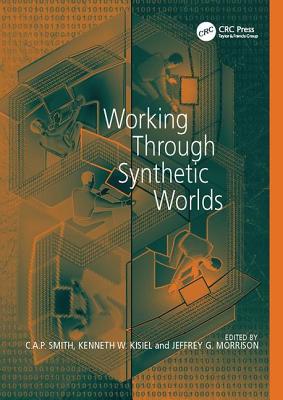 Virtual environments (VE) are human-computer interfaces in which the computer creates a sensory-immersing environment that interactively responds to and is controlled by the behaviour of the user. Since these technologies will continue to become more reliable, more resolute and more affordable, it's important to consider the advantages that VEs may offer to support business processes. The term 'synthetic world' refers to a subset of VEs, having a large virtual landscape and a set of rules that govern the interactions among participants. Currently, the primary motivators for participation in these synthetic worlds appear to be fun and novelty. As the novelty wears off, synthetic worlds will need to demonstrate a favourable value proposition if they are to survive. In particular, non-game-oriented worlds will need to facilitate business processes to a degree that exceeds their substantial costs for development and maintenance. Working Through Synthetic Worlds explores a variety of different tasks that might benefit by being performed within a synthetic world. The editors use a distinctive format for the book, consisting of a set of chapters composed of three parts: a story or vignette that describes work conducted within a synthetic world based loosely on the question, 'what will work be like in the year 2025?', founded on the expert authors' expectations of plausible future technologies a scholarly review of the technologies described by the stories and the current theories related to those technologies a prescription for future research required to bridge the current state-of-the-art with the notional worlds described in the stories. The book will appeal to undergraduate and graduate students, professors, scientists and engineers, managers in high-tech industries and software developers.

Dr C.A.P. Smith has an engineering degree from M.I.T. and a Ph.D. in Information Systems from the University of Arizona. He has more than 20 years of experience with research into decision-making in stressful conditions. He is an expert in the design of decision support systems and the application of Human Factors to Human-Computer Interfaces. Dr Smith's scholarly research has been published in numerous journals such as Human Factors, Group Decision and Negotiation, International Journal of Human-Computer Studies, and International Journal of Human-Computer Interaction. He recently spent 3 years working as a Senior Scientist for the US Navy's Space and Naval Warfare Systems Center where he managed several research and development projects. Kenneth W. Kisiel is Principal Research Engineer, Lockheed Martin Corporation. Mr. Kisiel is a Senior Technical Advisor assisting clients in applying virtual/synthetic worlds to information understanding. He has more than 30 years' experience in emergent technology consulting specifically related to information analysis and understanding. Mr. Kisiel was also the founder, CEO, and visioneer for WisdomBuilder, LLC which researched and commercialized advanced visualization analytical tools to both the government and private sectors. Mr. Kisiel holds patents in visualization and social network analysis. He earned a B.A.S from Florida Atlantic University and an M.S. from Johns Hopkins University. Dr. Jeffrey G. Morrison earned his Ph.D. in Psychology from the Georgia Institute of Technology. He has been a scientist with the U.S Navy since 1990, where he has led a number of research and development efforts in the fields of: cognition, decision support, advanced automation, and human factors. He is currently on assignment to the Office of the Director of National Intelligence (ODNI) as a program manager with the Space and Naval Warfare Systems Center - Pacific. Dr. Morrison received the Dr. Arthur E. Bisson Prize for Naval Technology Achievement from the Office of Naval Research for his work in developing and transitioning "Knowledge Web Technologies," which were instrumental to Naval operations during both Operation Enduring Freedom & Operation Iraqi Freedom. He has received numerous best paper awards as well as the American Psychological Association's George E. Briggs Dissertation Award, for original research exhibiting creative application of scientific inquiry in the area of engineering psychology.