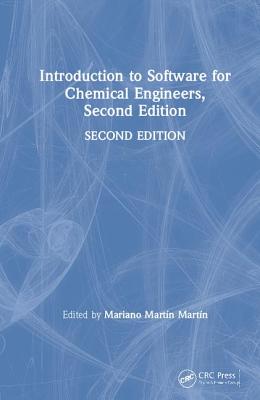 The field of Chemical Engineering and its link to computer science is in constant evolution and new engineers have a variety of tools at their disposal to tackle their everyday problems. Introduction to Software for Chemical Engineers, Second Edition provides a quick guide to the use of various computer packages for chemical engineering applications. It covers a range of software applications from Excel and general mathematical packages such as MATLAB and MathCAD to process simulators, CHEMCAD and ASPEN, equation-based modeling languages, gProms, optimization software such as GAMS and AIMS, and specialized software like CFD or DEM codes. The different packages are introduced and applied to solve typical problems in fluid mechanics, heat and mass transfer, mass and energy balances, unit operations, reactor engineering, process and equipment design and control.

This new edition offers a wider view of packages including open source software such as R, Python and Julia. It also includes complete examples in ASPEN Plus, adds ANSYS Fluent to CFD codes, Lingo to the optimization packages, and discusses Engineering Equation Solver. It offers a global idea of the capabilities of the software used in the chemical engineering field and provides examples for solving real-world problems.

Written by leading experts, this book is a must-have reference for chemical engineers looking to grow in their careers through the use of new and improving computer software. Its user-friendly approach to simulation and optimization as well as its example-based presentation of the software, makes it a perfect teaching tool for both undergraduate and master levels.

Dr. Mariano Martín is Associate Professor of Chemical Engineering at the University of Salamanca and Head of the Master Studies. He graduated cum laude in an integrated program (BSc+MEng) (2003) and holds a PhD in Chemical Engineering from the University of Salamanca 2008. Dr. Martín joined the Modeling & Simulation Department at Procter and Gamble. He left P&G for a Fulbright Postdoctoral Fellow position at Carnegie Mellon University. He received the accesit Mapfre Award in 2003, the Extraordinary PhD Award from Univeristy of Salamanca, and the P&G Award for his contributions to modeling and simulation in 2009. He has been named Rising Star in Chemical Engineering by Imperial College London in 2016 and has been nominated 3 times to the ENI Awards. Dr. Martín has published over 80 peer reviewed papers and authored/edited 4 books for major editorials. http: //diarium.usal.es/marianom3/