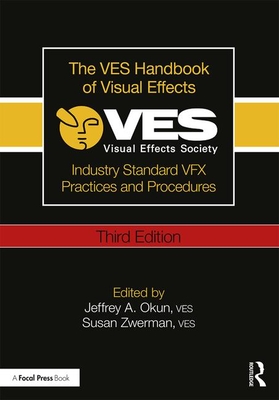 The award-winning VES Handbook of Visual Effects remains the most complete guide to visual effects techniques and best practices available today. This new edition has been updated to include the latest, industry-standard techniques, technologies, and workflows for the ever-evolving fast paced world of visual effects. The Visual Effects Society (VES) tasked the original authors to update their areas of expertise, such as AR/VR Moviemaking, Color Management, Cameras, VFX Editorial, Stereoscopic and the Digital Intermediate, as well as provide detailed chapters on interactive games and full animation. Additionally, 56 contributors share their best methods, tips, tricks, and shortcuts developed through decades of trial and error and real-world, hands-on experience.

A must-have for anyone working in or aspiring to work in visual effects, The VES Handbook of Visual Effects, Third Edition covers essential techniques and solutions for all VFX artists, producers, and supervisors, from pre-production to digital character creation, compositing of both live-action and CG elements, photorealistic techniques, and much more. With subjects and techniques clearly and definitively presented in beautiful four-color, this handbook is a vital resource for any serious VFX artist.

Jeffrey A. Okun, VES, is an award winning Visual Effects Supervisor, having worked on a large number of feature films, commercials and television shows. He started in the inudstry in 1976, and he is currently a member and Fellow of the VES and The Academy of Motion Pictures, Arts and Sciences as well as the American Society of Cinematographers (ASC), the Television Academy and the Editors Guild. He was the chair of the VES for 9 years and 1st vice chair for 16 years, and chair of the L.A. Section for 2 years. He created the VES awards along with Tim McGovern and Kim Lavery, VES.

Okun created a visual effects tracking and bidding software in 1992 that is still in wide use within the industry today, as well as the revolutionary visual effects techniques dubbed the "PeriWinkle Effect" (an underwater blue screen technique) and the "Pencil Effect" (accurately predicts the final visual effects count and budget).

has been a member of the VES since 1998. She is a highly respected Visual Effects Producer who has been producing visual effects for more than 25 years. Zwerman is also a well-known seminar leader and author. As Chair of the DGA's UPM/AD VFX Digital Technology Committee, Susan emphasizes the importance of the visual effects teams to DGA members at visual effects seminars organized under her guidance.

In 2013, Susan received the Frank Capra Achievement Award in recognition of career achievement and service to the industry and the Directors Guild of America. She is also a member of the Academy of Motion Picture Arts and Sciences, the Producers Guild of America and a Fellow of the VES.